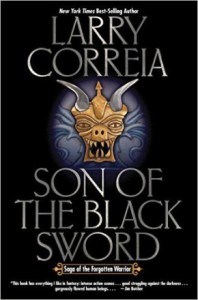 For many years, the fantasy genre has been taken over by pretty monsters whose skin sparkles, and who have model-level good looks and expertly coiffed hairstyles.

And, a modern trend in fiction has been to show the good in villains, and the bad in heroes. But that’s not how New York Times bestselling author Larry Correia wants his characters to be, and he has earned a loyal fan base because of it. His efforts enable readers to live vicariously through heroes that kick paranormal butt.

“People are sick of half-baked, self-conflicted bad guys. That’s why I set out to write books where the monsters don’t want to date you, they want to eat you, and the best way to deal with them is by shooting them in the face.”

“The only time vampires should sparkle is when they are on fire,” says Correia. Correia has received some notable honors for his unique take on fantasy, including his paranormal/fantasy detective noir books, the Grimnoir Chronicles receiving high acclaim, with Hard Magic winning the 2012 Audie Award for Best Paranormal Audio Book.

A prolific writer, Larry is also the co-author of the military thriller Dead Six with Mike Kupari, and has been nominated for and Audie for Best Thriller/Suspense 2015.

But his career didn’t start out with a big contract. Initially, Correia’s new ideas for a classic fantasy-adventure tale were overlooked by major publishers. That changed with the success of his “Monster Hunter Series” originally self-published but picked up by Baen Books which has resulted in over a dozen books now under contract. His latest series—The Saga of the Forgotten Warrior—is his first entry into the Epic Fantasy Arena and begins with Son of the Black Sword an allegorical warning against totalitarian society.

“Son of the Black Sword” takes place after the War of the Gods, wherein the demons were cast out and fell to the world. Mankind was nearly eradicated by the seemingly unstoppable beasts, until the gods sent the great hero, Ramrowan, to save them. He united the tribes, gave them magic, and drove the demons into the sea. Yet as centuries passed, Gods and demons became myth and legend, and the people no longer believed. The Age of Law began.

Ashok Vadal has been chosen by a powerful ancient weapon to be its bearer. He is a Protector, the elite militant order of roving law enforcers. No one is more merciless in rooting out those who secretly practice the old ways. Everything is black or white, good or evil, until he discovers his entire life is a fraud. Ashok isn’t who he thinks he is, and when he finds himself on the wrong side of the law, the consequences lead to rebellion, war—and destruction.

“I think my career as an American fantasy novelist proves at least two things: that people are hungry for the classic narrative of good versus evil, and that independent authors who are hungry and good enough can make it,” Correia says. “Sometimes, when there’s a trend like monsters having pretty teeth and hair, going classic and ugly works – splitting horns, craggy teeth, piggy noses and all!”