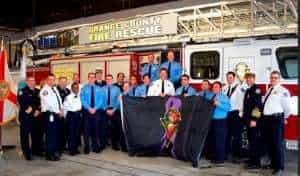 ORLANDO, Fla. – Orange County residents and visitors are likely accustomed to the sights and sounds of emergency response vehicles on the roadways, but what they may not yet have seen is the brand new Orange County Fire Rescue Truck 30. Unbeknownst to passersby, Truck 30 carries more than just life-saving equipment. It also carries the memory of fallen firefighter Carl Andriano. Andriano, who passed away in 2014 at the young age of 24, fought a brave fight against cancer. He had been assigned to Station 30, located in West Orange County and held the rank of honorary lieutenant.

Officially dedicated on Jan. 27, Truck 30 is equipped with a 95’ aerial platform that holds 300 gallons of water for suppression efforts. The unit is also designed to support other specialty rescues such as high angle and rope rescue. It is one of eight aerial units serving Orange County. A plaque on board the unit reads “30 STRONG” in honor of Andriano, whose legacy will endure through the Station 30 crew who served with him and through those who have since learned of his story.

“We pray that God will bless our Truck 30 crew and that Carl will guide our brave men and women as they lay their lives on the line each day,” Fire Chief Otto Drozd stated at the dedication ceremony. “He will always be remembered by his brothers and sisters at Orange County Fire Rescue.”

The new vehicle replaces the previous unit which was put into service in January 2004 and made 18,836 calls for service.