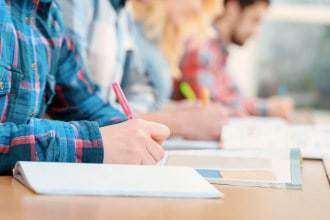 While the rates of African Americans pursuing higher education have greatly increased in recent years, it would appear that many are still stuck with lower paying college majors.

According to The Source, a study from Georgetown University’s Center on Education and the Workforce showed a significant gap between the value of African American students’ degrees.

Examining bachelor’s degrees across 137 different majors, the researchers found that despite making up 12% of this population, African American students account for a mere 8% of high-paying majors, while 21% are in low-paying majors.

Anthony Carnevale, an author of the report and the director of the center, stated that even black students who graduate with high paying degrees typically end up at low paying jobs anyway.

Carnevale noted that social and family factors often lead these students into lower-paying jobs even with valuable majors.

The study concluded that African American undergraduate students across the United States are more represented in social work positions, with 19% of black students in the coinciding major. This is followed by 17% in public administration, and 14% studying sociology.

However, high in-demand degrees, such as computer science and engineering, contain only 8% black students and 5% Hispanic students.

The decision to enter service-oriented fields are believed to be a result of strong community values in African Americans. Making up just 12% of the U.S. population, 20% of black people work as community organizers.

“The low-paying majors that African-Americans are concentrated in are of high social value but low economic value,” continued Carnevale.

Many researchers are now pushing for the implementation of Science, Technology, Engineering, and Mathematics (STEM) programs geared toward black students at an early age.

Unfortunately, it seems that even finding a decent job out of college may not be enough to get African American students out of financial strife.

While students of any ethnic background are currently suffering from crippling college debt, The Washington Post reports that middle-class African Americans and Hispanics are disproportionately unable to cover student loans.

What they found is abnormally high rates of past-due loans within predominantly minority areas in the middle of the income distribution — about $60,000 annually.

“The fact that, among minorities, the middle class is most strongly affected by delinquency implies the problem is structural racism within the U.S. higher education system, credit and labor markets, and the distribution of wealth — not poverty,” said Marshall Steinbaum, a research economist at the center.

Both African American and Hispanic families have long had a fraction of the income of white households and in turn don’t have access to many of the traditional ladders of economic opportunity, like home ownership.

Even though college education is one of the driving forces behind being able to move to a new home — with 77% of college grads changing communities at least once as compared to 56% with a high school diploma or less — for minorities, having a degree may not be enough on its own to allow for home ownership.

Economists state that this is the result of an overall poor job market, and one of the only profitable markets, high-tech jobs, almost exclusively generates wealth for white and Asian men.