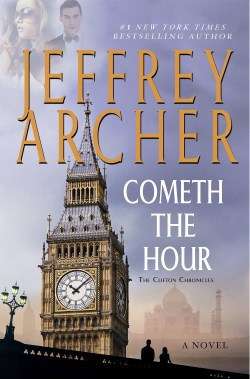 “Cometh The Hour” is the latest installment in the wonderful saga of the Clifton and Barrington families. Set against the backdrop of the 1970’s Archer incorporates real people and events into his fictional story the same way John Jakes did with his “Kent Family Chronicles.” The writing is fast paced with brilliant characters that keep the pages turning. What Julian Fellows does on TV with Downton Abbey, Archer does in print with the Clifton Chronicles. Both have likable characters set against the backdrop of historical events and people Readers will not have to wait as long for “This Was A Man,” the next chapter that is to be the last of the series targeted for November of this year. “Cometh The Hour” is sure to please the many fans of Jeffery Archer and “Downton Abbey.”

After the events in “Foreign Affairs” Stone Barrington heads to England for some rest and relaxation. Unfortunately for Stone, that is the last thing he is allowed to have. He is asked to purchase a piece of property that turns his whole world upside down because there is a menacing person who will stop at nothing to harm Stone and any one related to him. “Scandalous Behavior” is once again a delightful fast paced Stone Barrington tale that is sure to please the many readers of Stuart Woods.

Stephanie Plum is on the trail of a shifty used car salesman out on bail who did not show up for his court appearance. Once again there are lots of goofy characters Evanovich throws into the work, including Stephanie’s gun toting grandmother who is better than ever in the twenty first laugh out loud mystery adventure. Fans of the series are sure to love “Top Secret Twenty One for its page turning funny situations.

Volume 31 is the newest edition of the long running series. There are non fiction pieces by Kevin J Anderson, Orson Scott Card, Larry Niven, and a whole slew of other established science fiction writers, while there are 13 new authors of short stories that are fantastic excursions into the world of science fiction. This copy of “Writers of the Future” continues to show why it is the best place for new writers and artists to break into the field of science fiction.

Patterson is one of the best mystery writers and “Cross Justice” shows why his books are so popular. As Alex Cross helps a cousin accused of murder in his childhood home of Starksville South Carolina, he begins to piece together events of the past to a present day case in the sugar cane fields of Florida that reveals information on his father. Patterson tells a gripping tale of mystery suspense in “Cross Justice” that exposes more about the character Alex Cross and his family than ever before.

Elizabeth Ann Register nicknamed Betty and her family spend the summer on St. George Island in Florida. She finds a gold coin and a silver chain that she wants to know more about. With the aid of her horse Old Neb she has a wonderful summer adventure, also learning the history of the things she found. “Old Neb and the Lighthouse Treasure” sounds like a perfect first of a series novel but something goes wrong from the very beginning when the writing is very choppy. Telling the novel in the first person should have moved the story along but it is the constant informing who says something every time a character speaks that gets to be so tedious that it has the effect of screeching chalk on a board that detracts from the enjoyment of “Old Neb and the Lighthouse Treasure.” Hopefully in other books of the series the author will do a much tighter edit of the work.

On paper George Herbert Walker Bush was the most qualified person to run for president of the United States. Now Jon Meacham in “Destiny and Power” shows why many people through the years have thought so. The jobs of ambassador to the U.N., ambassador to China, head of the CIA, and vice president all trained him to be president. Some of the things he learned are tolerance of others, compromise to get the job done, and respect for the office of president during and after his term. Meacham takes readers through Bush’s entire life as from child to his retirement with Bush’s own diary writings and other sources to reconstruct the different aspects of George Herbert Walker’s career in public service and his life. What emerges is a man of character who rose to the occasion when he had to. There have been many books written in the past few years about George Herbert Walker Bush but “Destiny and Power” is the most detailed about a man who has always honorably served his country never, losing sight of who he is. The values he learned are lacking in this election season.

How many of us hated geography class so many years ago because it was so boring? Tim Marshall in “Prisoners of Geography” makes the subject interesting by showing how events of today are directly linked to the geography, a country. He makes a convincing argument that the reason Vladimir Putin has been taking over countries that once were under Soviet domination is because Russia has no seaport of its own. There are other regions of the world he makes similar arguments that include China, Korea, Japan, United States, Africa, and many others ‘Prisoners of Geography” should change a lot of people’s minds on the importance of geography and how it relates to our lives.

An author’s foremost responsibility to readers and critics alike is to capture them to want to read further from the first page of the work. Unfortunately the author uses terms and does not explain them from the first sentence in “True Bud”. An example is BIRD clients. He assumes readers know what he is talking about. From there he makes arguments abut marijuana use that may be very interesting but are lost because his first few pages are not enticing enough to continue to pursue.

From the cover of an image of a woman in a cocktail glass I wondered “what is this book about?” After reading a few pages I concluded. “I haven’t the faintest idea.” I wish when new authors present themselves through their work they would do a better job of presentation to entice me and others to read their book. “Lola” I am sure has an audience but I, for one, have no time to follow something I can’t understand.