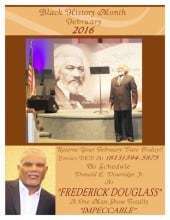 Over the last 24 years, Mr. Donald L. Dowridge Jr. (Motivational Speaker /Author /Actor) has written thirteen books and appeared in a number of hit television shows, including the HBO Series “The Wire,” the NBC show “Seaquest,” and others.

During the last seven years he has brought back to life, in his one-man show, one of Black America’s greatest orators:  author, journalist, and government official, Frederick Douglass.  Frederick Douglass was truly a remarkable American in the 19th century, and Mr. Dowridge’s one man show will leave his audience entertained, educated, and excited.

Mr. Dowridge, a Tampa resident was born and raised into a difficult childhood in Baltimore, and he has overcome tremendous hardships to share his special gifts to the world.   Thousands have been motivated and inspired by Mr. Dowridge’s performances.  His show is an opportunity to learn about one of the most eminent human and civil rights leaders of his time.  His performance will keep you on the edge of your seat.

DLD Enterprises is a one stop Black History Company, which is comprehensive and complete, and is a family show for all ages. Mr. Dowridge is available to appear at Organizations, Schools, Universities, Churches, Youth Groups, Major Events and Theaters.