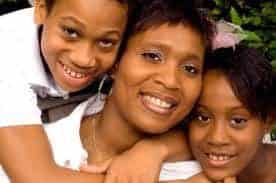 Black Americans have made considerable progress in the areas  of income and education.  However, when it comes to marriage and families, the numbers are bleak.  If you live on the fringes, this dismal view is your everyday reality  If you don’t, it takes statistics to bring the harsh reality to life.
First, not everyone agrees that marriage and families are important.  We live in the age of the socially acceptable “baby mama.” Many heterosexual women today reject the idea that a permanent reationship with a man is either necessary or desirable.  Many black women today simply out-earn their male counterparts.
It’s a complicated issue, but there is nearly universal agreement that single-parent households, overwhelming headed by women aybe  the black community, have long-term negative consequences for the kids.
On its website, the Black Family Preservation Group describes its mission as the creation of strong, stable family units, saying it “believes that 2-parent homes provide the best environment for raising children.”
Some say “it takes a man to teach a boy how to be a man.”
Men, however, are clearly missing in action.  William Julius Wilson argues that the inability of black men to care for their families, as a result of joblessness (last hired, first fired) and highly disproportionate rates of incarceration creates “high levels of economic dislocation” reflected in lower numbers of  marriageable black men relative to black women.
Perhaps as a result, only half of black Americans have ever married.  This is the highest percentage of unmarried persons among all racial groups. Only 30 percent of blacks are presently married.
While an average of 12.1 percent of single mothers are raising children under 18, nation-wide, when it comes to black families, that number is closer to 33 percent.  Black single parent households headed by women are usually economically poor.  Except for the upper middle class, two income households are almost required to meet the financial demands of child-rearing today.
But from 2007-2008, the likelihood of anyone in the family being employed declined.  This was true for blacks, whites and Hispanics.  Asian families were the most likely to have a employed person in the unit (90 percent), followed by Hispanic families (87 percent) and white families (82 percent). Black families remained the least likely to have an employed family member at 78 percent.  Without adequate employment, the children pay the price.  Black kids in the United States are in deep trouble.
Even two-parent families in the black community are not faring well– statistically.  Black 2-parent families have a median income of just over $65,000 a year, which is the lowest income figure for all races.  When one looks at the single, woman-headed household, the median income is only about $26,000 a year.  The U.S. government has set the poverty threshold for a family of four at $22,000 a year.
There is an interesting statistic that by age 17, black children who have grown up in single parent mom-headed homes are three years behind their white counterparts.  Unfortunately, those gaps don’t get closed by the education system, and that painful fact leads to higher dropout rates, higher unemployment rates and single parenthood– a vicious cycle.
Blacks have to pay attention to these numbers.  President Barack Obama was raised by a single mother and his grandmother, but the difference of course, is that they were white.  He escaped being another statistic.  Would he have had the same life result if his single-parent mother had been black? Not according to the statistics.
Kay S. Hymowitz, in her seminal work,The Black Family: 40 Years of Lies, disputes the acceptance of single-family households as the new norm, and suggests that until black families become as overwhelming two-parent again, as they are now one-parent, black children will continue to suffer bad parental decision-making.
“Sophisticates often try to dodge the implications of this bleak reality by shrugging that single motherhood is an inescapable fact of modern life, affecting everyone from the bobo Murphy Browns to the ghetto ‘baby mamas.’   Not so; it is a largely low-income—and disproportionately black—phenomenon. The vast majority of higher-income women wait to have their children until they are married. The truth is that we are now a two-family nation, separate and unequal—one thriving and intact, and the other struggling, broken, and far too often African-American.”