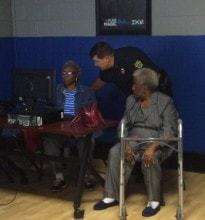 ORLANDO, FL- On, February 20 and 22, 2016, the City of Orlando and the Orlando Police Department hosted an open data preview with Neighborhood Watch leaders and captains showcasing data that will help further their efforts in working with the City to keep Orlando safe.
“The partnerships between OPD officers and Orlando’s residents are critical in the fight against crime and keeping our neighborhoods safe,” said Orlando Mayor Buddy Dyer. “City residents are truly the eyes and ears in the community and with initiatives like our Open Data website, we are equipping them with important tools and information to utilize in their efforts.”
The event gave residents a first-hand look at data that can be used to help identify and target crime trends and give them a better understanding of specific issues in their neighborhood to implement programs to increase safety and awareness.
“I pride myself in being a part of what makes Orlando safe,” said Jasmine Campuzano, Royal Isles Apartments Resident Manager.  “It takes everyone lending a hand in order to achieve maximum safety and this new tool the City is launching will provide a great resource to further those efforts, tailoring them specifically for what trends we are seeing based on this data.”
The City will use the feedback from this meeting to finalize the data sets that will be publicly released as part of the official launch of the City’s Open Data Website in March 2016.
CITY OF ORLANDO OPEN DATA WEBSITE BACKGROUND:
The Neighborhood Watch preview event is part of a series of demonstrations the City is hosting with various constituent groups to give citizens an opportunity to interact with the data, suggest future potential data sets and provide feedback on the specific data presented and the City’s Open Data Website (data.CityofOrlando.net) itself, which will launch publicly in March 2016.
With the tools embedded on the new site, residents, business owners and City staff will be able to easily access and run simple analysis and visualizations of select data sets. Allowing web developers to interpret that data and build their own applications.
Data sets that will be available initially on the website include data on Orlando Police Department cases and calls for service, building permits and business tax receipts issued and commissioner, neighborhood and solid waste route maps.
This initiative is part of the City’s continued efforts to ensure an open and transparent government that provides increased access to municipal resources, furthering economic development and creating opportunities for collaboration.
- Advertisement -
- Advertisement -
Share
Facebook
Twitter
Linkedin
Pinterest
WhatsApp
Email
Previous articleHillary Clinton Meets with Civil Rights Groups, Black Millennials
Next articleRufus Brooks dead at 88

Warnings over IS cyber-threats

VIDEO: On the banks of the new Suez Canal