The Super Bowl Was Broadcast in Spanish, And Here’s Why It Matters 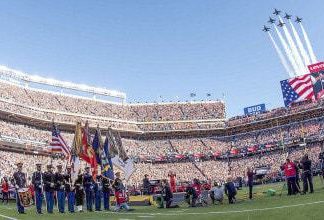 Super Bowl 50 was pretty special this year. Not just because Beyonce rocked the socks off Chris Martin, and not just because it was the annual check-in of how many chicken wings you can eat before the acid reflux kicks in.

Super Bowl 50 was pretty special because, for the third year in a row, it was broadcast in Spanish.

As reported by the International Business Times, CBS had exclusive rights to show the game in English. ESPN Deportes, a Spanish-language station for ESPN, was able to broadcast the game in Spanish during its “Monday Night Football” program with voiceovers by Alvaro Martin, Raul Allegre, and John Sutcliffe.

This year’s Super Bowl game emphasized that the Spanish-speaking population in the U.S. is growing stronger and that Spanish-language media is a worthy investment.

“As the broadcaster of Super Bowl 50, it was a priority for us to find a Spanish-language partner to televise this historic broadcast and reach the NFL’s Hispanic fan base,” said Sean McManus, chairman of CBS Sports, in a statement issued back in December. “The ESPN Deportes presentation of Super Bowl 50 will be a great complement to our broadcast on CBS.”

Not only was the game itself broadcast in Spanish, but several companies advertising during the game also chose to create special Super Bowl commercials to be aired in Spanish. Bud Light was one of the standout companies with a catchy commercial; the lighthearted 30-second “Voto,” featuring Michael Pena, marks the first time Bud Light aired a commercial in Spanish.

Super Bowl commercials are typically some of the most high-profile advertisements that a brand will create in an entire year, and the budgets of marketers for Super Bowl projects represents that well. According to Campaign, a 30-second spot on the CBS network during the Super Bowl costs companies $5 million — and that doesn’t even include the money these brands pay to produce the commercials, either.

For marketing teams that want to get the most out of their 30-second commercials, internet marketing provides seamless integration of different strategies into one campaign (and this versatility is probably why marketers will spend an estimated $103 billion on these expenses by 2019). Still, even the most extensive online marketing campaign can be unsuccessful if key audiences can’t identify with it — which is exactly where Budweiser made a wise decision. It created the “Voto” commercial under the same theme “Raise One to Right Now” theme of its English-language commercials, but it created a completely new and unique commercial for ESPN Desportes instead of just substituting a Spanish voiceover for the English one.

TV commercials might not be the high-quality sources of entertainment, but this particular Super Bowl — and its commercials — seem to show that marketers are recognizing the importance of Hispanic-American consumers.

Health Risks Differ Among Hispanics in the US