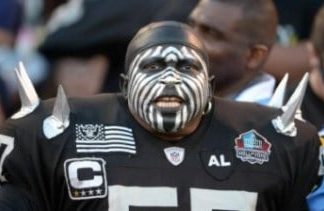 What A Fan is happy to introduce this week’s Fan of the Week. Meet “The Violator.”
This huge Oakland Raiders fan was one of the very first sports fans we interviewed seventeen years ago.
We met him in San Diego for the Raiders vs Chargers game, but it seemed like a home game for Oakland. We attended the game with our film crew and a popular HBO Star who quickly realized the Violator was the star of his world. We hadn’t seen anything like this fan, he was a rock star.
Wayne “The Violator” Mabry has been a fan for over 42 years now. His passion was triggered by the Oakland Raiders shield, he always loved KNIGHTS & GLADIATORS and his persona grew from that.  He has experienced countless sports moments, and one of his favorites was attending his very first game in person.  He describes it as an unforgettable moment!
Wayne has enjoyed meeting all the Raiders players. Everybody loves a real fan!
It was interesting to hear from him that the players were very approachable and share the same passion for the game– and the team– as their fans. We asked him what his family thought about his devotion to the Raiders and his alter ego.
“My family understands that the PASSION I have is TERMINAL….you can only treat the SYMPTOMS. My costume and alter ego is an EXTENSION of my PSYCHE.  BASICALLY IT CHOSE ME. My family love me and my passion.”
Congratulations Violator, you are What A Fan’s Fan of the Week. For more information about What A Fan visit our website at www.whatafanshow.com.
by Lowell Moore
- Advertisement -
- Advertisement -
Share
Facebook
Twitter
Linkedin
Pinterest
WhatsApp
Email
Previous articleEarthTalk®: Non-stick Cookware Risks
Next articleOrlando Presents Welcoming Environment for Female Business Owners

Was Jesus born in Judea? Or the West Bank?