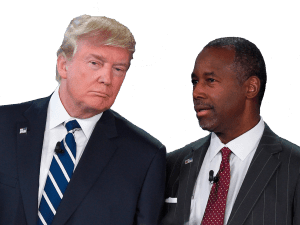 Just minutes ago, MSN reported that Ben Carson has jumped to the defense of Donald Trump one more time, on the heels of yet more salacious, possibly racist remarks made by the Republican presidential nominee– .

Guess the fact that Curiel spent ten years in private practice in California and Indiana, another 17 as a federal prosecutor in Southern California, and rose up through the ranks to become chief of narcotics enforcement in San Diego doesn’t matter to The Donald.

Guess the fact that Curiel went into hiding, protected by U.S. Marshals for a year, rather than cave in to the demands of the Arellano Félix cartel in Tijuana, Mexico doesn’t say enough to Trump about the Judge’s character.

And even though he was appointed to the California Superior Court by then-Gov. Arnold Schwarzenegger (a fellow Republican), and passed all the background and other necessary checks after being appointed to the federal bench by President Obama, somehow Trump doesn’t believe he is able to handle the TU case– because of his ethnic background.  And never mind that the judge was born here in the United States, in Indiana.

It’s hard to reconcile these repeated racially insensitive remarks by Trump, with the notion of him sitting in the White House.  House Speaker Paul Ryan (R-WI) labeled the remarks “the textbook definition” of racism.

Trump, as he always seems to do in the wake of the backlash that follows his foot-in-mouth comments, said that his words were misconstrued.  Poor Trump, always misconstrued.  I wonder what that would look like– what it would mean for the U.S.– if he were misconstrued about the nation’s intentions in some sensitive diplomatic discussion.

While many in the GOP immediately stepped forward to do damage for the sake of the party, Ben Carson defended Trump in an interview with Politico, saying the Republican nominee for president was “probably talking out loud rather than thinking. That’s not a good thing to do when everything you say is going to be analyzed.”

Trump, Carson said in the same interview, “fully recognizes that that was not the right thing to say.”  Which begs the question: did he know before he said it (and said it anyway), or did he not know until after the outrage that followed (should he really be running for the highest office in

Unfortunately for the GOP, Republicans have no other options:  it’s either Trump for president, or sit out this election.

Back in March, Carson excused Trump’s comment that women who undergo abortions should face “some form of punishment” — and his subsequent flip-flop — by saying Trump hadn’t had enough time to think the issue through.

“Bear in mind, I don’t believe that he was warned that that question was coming, and I don’t think he really had a chance to really think about it,” Carson said.
Guess that means no more live TV appearances, then.
Carson also made light of the charges that Trump’s remarks were racist in character, saying ‘What’s the alternative?’
Some of us might answer, “anyone not racist.”
According to Carson Trump would restore America’s “more traditional values.”

I might be alone in this, but what Trump–and apparently Carson– apparently see as the nation’s “more traditional values” sound pretty scary.  How far do you actually have to go from making everything that’s wrong with this country about another person’s race or national origin, to lynching them– “high tech” or otherwise?