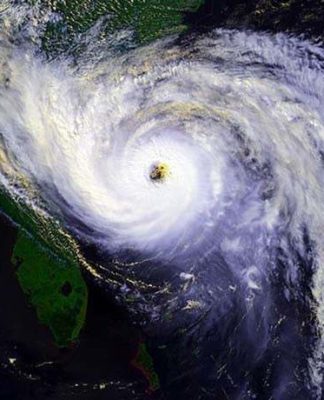 Tropical Storm Colin hit the Florida Panhandle around 2 a.m. on Tuesday with 50 mph winds as it made its way northeast towards the Atlantic.

Colin, the first tropical storm to hit Florida in three years, knocked out power to about 47,000 Florida residents on Monday night from Tampa Bay to Jacksonville. Governor Rick Scott declared a state of emergency for 34 counties, which included the majority of Central Florida.

As of mid-afternoon on Tuesday, all tropical storm warnings were lifted, though flood watches remained in effect throughout East-Central Florida. Officials report that some parts of the state received as much as 10 inches of rain.

Though inconvenient, this type of weather is nothing new for resilient Floridians. Some residents went so far as to call Tropical Storm Colin a “test run” for hurricane season.

“It’s a good fire drill,” said Brian Mugrage, a commercial fisherman in St. Marks, FL. “Because I have a feeling that we’re going to have a season similar to 2005.”

Mugrage is referring to the catastrophic 2005 season, which was the most active Atlantic hurricane period in history, with a record total of 26 named storms, 15 of which were hurricanes. Vicious storms such as Katrina, Rita, and Wilma all hit the coast that year.

The official hurricane season in the United States is the period between June 1 and November 30, with August, September, and October being the most severe months.

Experts predict that the 2016 season will be particularly brutal for the state of Florida. In fact, Global Weather Oscillations Inc. (GWO) is expecting an extremely active year with 17 named storms, nine hurricanes, and four major hurricanes.

While on average, homeowners will spend up to 4% of a home’s value annually on maintenance and repairs, Florida residents may expect to pay a bit more in the wake of any number of severe storms.