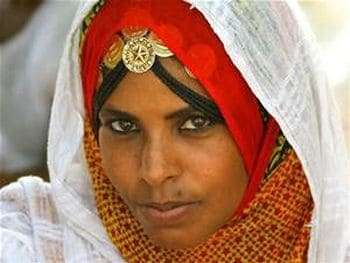 UPDATED 6/13/2016: The UN has just released a scathing report denouncing Eritrea’s government of committing crimes against humanity over the past 25 years since achieving its independence.  Up to 400,000 people are presently “enslaved” in Eritrea, according to the UN’s Commission of Inquiry (COI) on human rights, and for many this means they are forced to serve in the military.

“We probably think that there are 300,000 to 400,000 people who have been enslaved,” chief UN investigator Mike Smith told journalists in Geneva.

Large numbers of Eritreans– about 5,000 per month– try to flee the nation where the historical record says forced military service can last for decades.

“Very few Eritreans are ever released from their military service obligations,” Smith said.  They are not paid and are sent to detention facilities if they refuse to work, the report details

Eritrea’s Minister of Information, Yemane Meskel, was not happy about the report, and immediately took to Twitter. 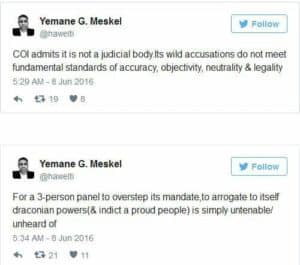 Meskel did not address any of the specific charges leveled by the UN,  one of which claimed that Eritrea operates a shoot-to-kill policy to stop people from leaving the country.  Instead, Meskel responded in general terms saying that the accusations “do not meet fundamental standards of accuracy, objectivity, or legality,” without saying how.

According to Charlotte King, an analyst with the Economist Intelligence Unit,  “[I]t is . . . unusual for the Eritrean government to comment on violent outbreaks. On the back of a damning UN report last week its critics will argue that it is (a) trying to divert international attention away from the alleged crimes against humanity, and (b) justifying its need for an enormous military and compulsory conscription.”

In 1991 Eritrea gained its independence from Ethiopia after a 30 year civil war, beginning in 1961.  Eritrea had become part of Ethiopia after World War II, when both territories were liberated from Italian occupation. Ethiopia claimed that Eritrea was part of Ethiopia and fought to keep it under its control.  Without Eritrea, Ethiopia is a landlocked nation with no access to the Red Sea.

On May 29, 1991, the Eritrean People’s Liberation Front (EPLF) defeated the Ethiopian forces in Eritrea and took control of the country. Two years later, in April 1993, in a referendum supported by Ethiopia, the Eritrean people voted almost unanimously in favor of independence.

Although calling itself a democratic state, Eritrea is a one-party state, meaning only one party, the People’s Front for Democracy and Justice, is allowed to exist.  Isaias Afewerki was elected president of Eritrea by the national assembly in 1993.  While local elections take place infrequently, presidential elections, planned for 1997, never happened. 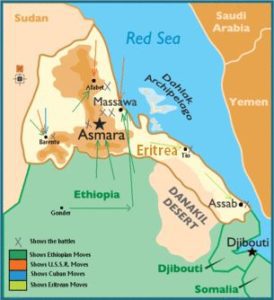 Yemane Ghebremeskel, the President’s Chief of Staff, said that “whenever the electoral commission sets the date there will be national elections,” but side-stepped the larger question of when national elections might be held.

“The view from the beginning was that you don’t necessarily need a party law to hold national elections. . . . In terms of commitment it’s very clear, in terms of the process, it has its own pace, its own characteristics,” he said.

King notes that “[t]he two sides fought a two-year war in 1998-2000 in which tens of thousands were killed. Aggressive rhetoric between them has continued ever since, but accusations of direct attacks are relatively rare.”

The UN Commission of Inquiry recommended that the international community and the International Criminal Court get involved.

According to Reporters Without Borders, Eritrea ranks below North Korea as the worst in the world for freedom of the press, and the World Bank says that with an annual per capita gross national income of just $480, Eritrea is one of the poorest nations in the world.