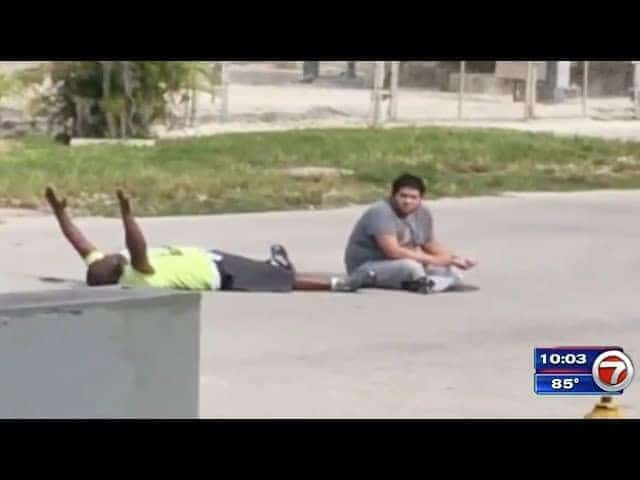 Unarmed, lying on his back on the street.  Arms raised high.  Forty-seven-year-old Charles Kinsey was shot by police yesterday in North Miami, Florida, for no apparent reason.  He was fortunate.  Unlike many other victims of unjustified police violence, Kinsey survived.

“Why did you shoot me?” Kinsey says he asked the Florida police officer who shot and wounded him.

“I don’t know,” he says the officer said in response.

Police had been called to the scene after someone dialed  911 and reported that a suicidal man armed with a gun was walking around the streets.  When they arrived on the scene they found Kinsey, a therapist who works with people with disabilities, trying to get his 27-year-old autistic patient back to a facility from which he had wandered.

Police ordered Kinsey and the patient, who was sitting in the street playing with a toy truck, to lie on the ground. Kinsey complied, lying down on his back with both hands outstretched, high in the air. On the citizen video that caught the encounter, Kinsey can be explaining who both of them were, and telling police that the patient was not armed, and that all he had was a toy truck.

Lindsey can be heard telling his patient repeatedly to lie down on his stomach, while the autistic man sits next to him, yelling at him to “shut up.”  Kinsey can be heard asking the officers not to shoot him, and what appears to be moments later, the officer fired three times, striking Kinsey in the leg.  As Kinsey had advised, no weapon was found, and the autistic man, the only person with anything in his hands, was not injured.

Kinsey is black. Police haven’t released the name or race of the officer who shot him but said he’s been placed on administrative leave, which is standard..

In an interview with the TV station, Kinsey said he never thought for a moment that he’d be shot.