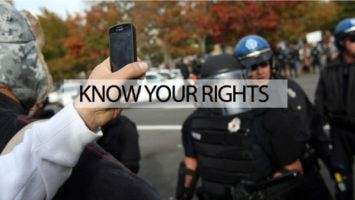 In America there are laws that protect the rights of individuals to blow the whistle on wrongful corporate conduct.  Federal agencies like the IRS and the Securities and Exchange Commission have come to rely on information from whistleblowers to deal with violations of laws and regulations.

Most states make it illegal to fire or otherwise retaliate against an employee who reports the illegal or unethical acts of an employer.

Although the decision to come forward and report wrong-doing is not always easy, employees can take some comfort in knowing that laws exist to protect them against retaliatory firing.

It’s time whistleblowing laws caught up with the rest of us.  Smartphone videotaping capability has pushed our nation into newly discovered areas of “whistleblowing.”  Police are by and large the targets of this exposure by video, and it’s time to come to grips with the need to protect citizens who do the right thing from retaliatory action by the men and women in blue.

Christopher LeDay is the man who videotaped and posted the killing of Alton Sterling.  Unknownn to most of us, less than 24 hours after the post, LeDay was arrested on his job at Dobbins Air Force Base and charged with assault and battery.

LeDay’s lawyer says the charges were trumped up; that police locked him up and held him for more than 24 hours without ever producing a warrant.

“There was  never any warrant for his arrest,” said attorney Tiffany Simmons. “My client has never had any criminal history.”

Once she pressed them on not having a warrant, police then told her LeDay was being held for unpaid traffic tickets.

After he paid the tickets and tried to return to work at the Air Force Base, she says LeDay was turned away at the gate to the base for “security clearance issues.”

Ramsey Orta, the man who filmed a police officer choke Eric Garner to death, was arrested at least five times after posting his video.

Excessive force and brutality against citizens– especially when it leads to loss of life– should be every bit as important to society as reporting tax cheats and securities thieves.  Especially since a picture is worth a thousand words.

Uprooting and exposing police misconduct should be encouraged and applauded, not condemned and penalized.

John Acton said that “power tends to corrupt, and absolute power corrupts absolutely.”  But David Brin says power is not the culprit.  He argues that it is  the person who is blinded by the power that is at fault.

I think Brin more likely has it right.  This more likely explains why only a handful of officers frequently violate the laws they are sworn to uphold.

Employee whistleblowers are protected by law because we understand the tendency of employers to get back at those who expose their wrongdoings.  Why would we suppose that local police departments are any different?

Recognizing that some police are improperly motivated ought to spur us to demand that our legislators provide protection from retaliation for every citizen who exposes misconduct by videotaping the violators in action.