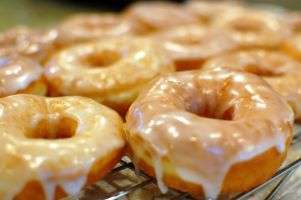 “Yo, Mack!” I ran the last few feet to the diner door.  “The police are outside looking for you,” I said.

“You, man. They were looking in your car and said they saw drugs inside.”

“Why are they looking inside my car?” he asked. “And what drugs?  Ain’t no drugs in my car?  Mack looked confused– and a whole lot nervous, too.

“They said they can see some crystal meth in plain sight on the front seat of your car.  They’re looking for you.”

“Let me go out there and find out what’s going on,” Mack took a deep breath.

“Don’t do it, Mack.  You’re too big.  The cops will shoot you first then ask you what you want.”  I couldn’t tell whose voice that was.

“Yeah, don’t go out there,” I said. “I already told them that it’s not crystal meth.”

Mack paused to look at me, waiting.

“I told them that you eat a mountain of Krispy Kreme donuts every day.”

Mack’s whole body relaxed and he shook his head.  “Look out the door, Rick,” Mack said, sighing a sigh of relief.

“That was so wrong,” Mack said.  “You’re working my blood pressure.”

“Oh, I get it,” said Rick.  “The old man arrested by the cops the other day, right?  The cops said they found crystal meth in the car, but–”

Everybody looked to me at the same time.  People think you ought to be an authority on the news if you work  for a newspaper.  Good thing I knew the story.  Have to keep my street cred up.

“OK.  So, the police pulled this 64-year-old guy over because they said he was speeding.  The cop who stopped him looked down into his car and said she saw a ‘rock-like substance’ on the floor.”

“Yeah,” I answered.  “She said based on her 11 years of training and experience as a law enforcement officer she could tell the stuff she saw was some kind of narcotic.”

“First she says it’s crack cocaine. So they do a field test on the stuff and it comes back positive for crystal meth,” I looked around and a other folks in the diner had turned around in their seats and were listening, too.

“The old man says he doesn’t do drugs.  He tells them that what they’re testing is the glaze from his Krispy Kreme donuts.”

“Get outta here,” Little Willie says.  “He had to come up with something better than that.  I mean, How’re you gonna pass off some crystal meth as donut glaze?”

“Wait on it,” Rick said again.

I could tell that more than a few of the people in the diner were hearing about this for the very first time.

“So, they do the test again, and it comes back positive for crystal meth.  Again.”

“I still don’t get it,” Willie said, tossing up his hands.  “And if you say ‘Wait on it one more time, I’m gonna slap you with a hamburger patty,” he said to Rick.

“They take him in and lock him up,” I continue.  “He spends a bunch of hours in jail and he’s finally released on bail.”

“I don’t know,” Willie said, shaking his head.  “Is there a moral to this story?  ‘Get caught with drugs in your car and you go to jail?’  Or, ‘even senior citizens who use drugs can get locked up?'”

“Come on, Scoop,” one of the other diners said to me.  “You’re killing me with the anticipation.”

“Yeah, stop dragging it out,” Shirley said from behind me.  “Just go on and tell him.”

“Alright,” I said.  “A few weeks later a state crime lab tests the same stuff the cops took from the old man’s car.  Turns out it wasn’t crack OR crystal meth.”

The place erupted in laughter.

“Is he suing?” somebody asked.

“So we’ve gone from police brutality to police stupidity,” said Willie. “Hey, Mack, with all that Krispy Kreme glaze you have in your car, why don’t me and you take a little drive around town and see if we can get some Orlando cop to pull you over.  I could use a nice Krispy Kreme holiday.”

“Eleven years of experience,”  Uncle G said.  “Doesn’t say much for the kind of training going on over there at OPD (Orlando Police Department).”