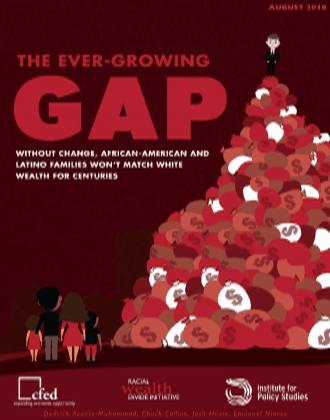 The “Ever-Growing Gap” report by the Corporation For Economic Development and the Institute for Policy Studies (IPS) looked at trends in household wealth for families from 1983 to 2013. Josh Hoxie, director of the Project on Opportunity and Taxation at IPS, said that widening racial gaps in home ownership and median incomes contribute to the overall wealth gap.

“The story we’re seeing around wealth,” Hoxie told NPR, “is that this problem has been growing for decades and is going to continue for decades, unless we take serious action.”

Median wealth for Hispanic- and African-Americans is about 90 percent lower than for whites nationwide.

Home ownership is one of the biggest ways families build wealth, Hoxie said, and minority families are far less likely to own homes as a result of years of discriminatory housing policies.  Politicians tasked with “bringing home the bacon” to their constituents have a more difficult time of finding support among other legislators to get bills passed when the issue is creating wealth in black and Hispanic communities.  Hoxie says an upside-down tax system has also contributed to the disparity, by putting money in the pockets of the disproportionate number of white homeowners.

“We have a system that incentivizes wealth creation, which is a good thing,” Hoxie said. “But, the bad thing is that that system is currently benefiting people who are already wealthy, and contributing to the racial wealth divide.”

The minimum wage is another piece of the wealth puzzle according to the report.  A low minimum wage hurts families who are simply trying to stay above water.

“When we don’t raise the minimum wage for a long time, it’s not just that people aren’t creating new wealth – they’re not creating a safety net to fall back on in hard times,” he said. “They’re also going further into debt just to cover their basic expenses.”

Here in Orlando, Kevin Seraaj, publisher of the Orlando Advocate, has been vocal about this issue for years.  A former commissioner with the Orange County Florida Planning & Zoning Commission, Seraaj has written extensively on the subject of wealth creation in the African-American community, and in addition to the elements mentioned by Hoxie, he sees another component of what he terms the economic bailout of the black community.

“No matter how many Oprahs, Bob Johnsons or Michael Jordans there are, for blacks to ever have a realistic hope of bridging the wealth gap in this country, we have to intentionally support black business,” he says. “If we do not, we will never overcome the economic inequalities caused by working for over 200 years with no pay.”

As an example of intentionally supporting black business, Seraaj points to the Greenview neighborhood in Tulsa, Oklahoma, before it was burned to the ground in the Tulsa Race Riot of 1921.    A segregated black community locked out of the surrounding white community, its residents spent all its money with black shopkeepers and business owners who in turn hired from the black community that supported them.  The entire community enjoyed the fruits of the wealth that was generated, and the amount of money they accumulated earned it the name Black Wall Street.  Their successes ultimately led members of the nearby white community to ‘put the uppity negroes in their place.’

According to sfbayview.com, in Black Wall Street the dollar turned over 36 to 100 times, meaning a dollar stayed inside the Greenview neighborhood for almost a year before it finally left.  So one dollar had the spending power of 36 to 100 dollars in Greenview.  “That’s sort of like putting a dollar bill in your pocket and being able to spend it 36 to 100 times,” says Seraaj.

“I can’t verify the NAACP’s data,” Seraaj cautioned, “but I can tell you about a conversation I had with a Jewish Rabbi about twenty years ago. We were discussing the Biblical connections between blacks and Jews when he suddenly stopped, shifted in his seat, leaned toward me and asked: ‘Do you know the biggest difference between your people and my people?’  I waited.  He said, ‘My people will drive past 20 stores to get to one owned by a Jew. Your people won’t do that.’”

“Years ago a young man named Ervin Brown set up a seafood restaurant in a black neighborhood just off of Downtown Orlando,” Seraaj continued. “He kept the place immaculate. You could eat off the floor. The grills were placed in plain sight of the customers so you could see what was happening to your food And the food tasted great.

“While he was servicing 2 or 3 customers in his place, there was a long line of black customers standing outside an immigrant-owned restaurant about a half-block down the street. I went in to see for myself what was so compelling about the place and I was appalled.  It was filthy.  The floors were dirty– looked like they had never seen a mop.  There was a rancid odor in the air.  There was dirt and what looked like blood splatter on the walls.  The wire mesh separating the customers from the back was thick with dust and soot that had gotten stuck in grease that was evident everywhere.

If anyone appreciates the importance of black business it is the many entrepreneurs and business owners who every year struggle for a piece of the American economic pie.  According to the national Survey of Business Owners, the number of black-owned firms grew 34.5 percent between 2007 and 2012 — from 1.9 million to 2.6 million in 2012.

And the great majority of those businesses have fewer than 4 employees.  Small and marginal are the words that have described black business since . . . well, forever.

“When businesses do well, they expand,” said Seraaj. “They hire employees who in turn buy goods and services from their employers. Our problem is that we tend to prefer spending our money with other people.”

And it’s a lot of money.  On May 29, 2013, Black Enterprise analyzed a 2012 Nielsen study that concluded that African American buying power would reach 1 Trillion dollars by 2015.   Jeneba Ghatt of Politics365 looked at the study and questioned:  “Should we be proud of just making up 13% of the total population yet spending at a rate of growth that outpaces the remaining population by 30 percent?”

Maybe the better question would have been: “should we be proud of spending almost all of that money outside our own communities where it is not spent back with us?”

“And we just might be the only people on the planet who do that,” Seraaj continued. “In order to fix the problems of our community we must grow our businesses, hire our people, fund our schools, and vote– and stop apologizing for doing what benefits us.”

The difference between the 228 years it will take blacks to catch up and the 84 it will take Hispanics can possibly be explained by community support of business.

“It is a well-known fact that Hispanics support other Hispanics in business.  If we just took a page from their playbook, we could make a major impact on our community within a matter of a few years, if not months.

Two hundred and twenty-eight years is a  very long time.

As Hoxie noted, the situation is dire. If blacks have any hope of ever bridging the gap, serious action– of some sort– must be taken, and taken soon.