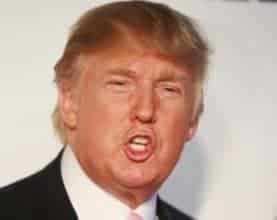 Donald Trump is in danger of sending the Republican Party into a tailspin as fears grow that he will be personally responsible for a landslide defeat in November that will cause huge GOP losses in Congress.

Trump’s reputation has become so bad that the number of Republicans running away from him has reached all-time highs.  GOP Sen. Susan Collins of Maine is the latest defector, and she is the most senior senator so far to publicly step away from Trump.  Her very public message of disfavor is expected to signal other Republicans that it’s okay for them, too, to walk away from the party’s presidential nominee.

I had hoped that we would see a “new” Donald Trump as a general-election candidate — one who would focus on jobs and the economy, tone down his rhetoric, develop more thoughtful policies and, yes, apologize for ill-tempered rants. But the unpleasant reality that I have had to accept is that there will be no “new” Donald Trump, just the same candidate who will slash and burn and trample anything and anyone he perceives as being in his way or an easy scapegoat. Regrettably, his essential character appears to be fixed, and he seems incapable of change or growth.   Sen. Susan Collins of Maine

With his own words, Trump has shot himself in the foot so many times he’s ready to be confined to a wheelchair.  Rather than align themselves with a man they perceive to be a political cripple, large numbers of both current and former Republican lawmakers have elected to either sit this election out or cross over and vote Democratic in the fall.

Thanks to Trump and his supporters, the GOP is in very serious trouble today.  In a recent USA Today/Rock the Vote poll Hillary Clinton is beating Donald Trump by 56 percent to 20 percent among voters under 35.   That’s huge– and it represents an astonishing collapse in the voter pool for the GOP.   Young voters become older voters over time, and they tend to bring with them the views that they formed as younger voters.

Clinton may have an email ethics problem, but Trump has a serious tolerance problem.  By and large, younger voters are much more tolerant of other people’s differences than Trump clearly is.  Where Trump snickers at racially inclusive language as “politically correct,” younger voters see it as morally correct.  By and large, they don’t embrace anti-immigrant attitudes, and they don’t talk nearly as much about out-dated concepts like “reverse discrimination.”

While the GOP’s failure to evolve on issues like immigration and gay rights can’t be blamed on Trump, he has exacerbated the problem.  His call this week for “extreme vetting” and a new ideological test for immigrants before they are allowed into the country is guaranteed to drive away even more young voters.

It may take generations for the GOP to catch up with the rest of America again.