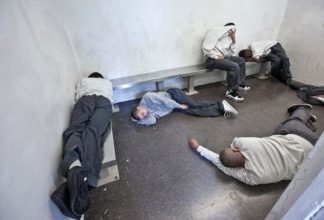 The U.S. locks up children at more than six times the rate of all other developed nations. The over 60,000 average daily juvenile lockups, a figure estimated by the Annie E. Casey Foundation (AECF), are also disproportionately young people of color. With an average cost of $80,000 per year to lock up a child, the U.S. spends more than $5 billion annually on youth detention.

TALLAHASSEE, Fla. – Close to 1 million young people nationwide enter the juvenile-justice system each year, and a new report finds those who can’t pay court-related costs can get pulled deeper into the system.

It’s a kind of “debtors’ prison,” the report found, with fees and fines that include the cost of tests and evaluations, restitution, probation and court operations. According to the Juvenile Law Center findings, when a family can’t pay up, a young person can be placed in a secure facility or have his or her probation extended.

Jessica Feierman, the center’s associate director, called it a punishment for being poor.

“We’re creating two separate systems of justice. This is really a glaring example of justice by income,” she said. “We really can do better; we can setk a system that’s fair to all young people, not just the ones who have access to money.”

Erin Davies, executive director of the Juvenile Justice Coalition, said the consequences of these costs can increase recidivism and detour a young person from getting onto the right track. She said the report suggested restitution policies that consider rehabilitation along with addressing victims’ needs.

“What does that mean,” she said, “for that young person, their family, their credit, their ability to move on with their life while still, you know, being responsible to the person they harmed? It’s a very delicate balancing act that we have to be very careful to get right.

“Should I pay for my one child’s school uniform or my other child’s court fees? Is it worth going into debt so that I can pay off these fees? That’s a strain on a family that’s not going to help either the child or the family,” she said. “We’re just deepening the cycle of poverty.”

The report said young people also risk not being able to expunge or seal their juvenile court records if they can’t pay their fines, plus the possibility of additional court visits, parents held in contempt and increased family debt.

The report is online at debtorsprison.jlc.org.

There is not a racist bone in my body