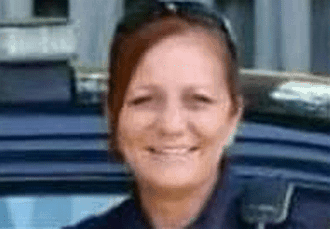 JACKSON, Ga. — Authorities are charging a Georgia police officer with fabricating a story that she was shot by a  black man.  Warrants were issued charging Jackson police Officer Sherry Hall with making false statements, tampering with evidence, interference with government property and violation of oath of office.

The Georgia Bureau of Investigation says Hall made a police radio call early on Sept.13, and said she had been shot. She claimed that she encountered a black man while on routine patrol, and that when she approached him to ask why he was there he became argumentative and shot her.  She said she fired two shots at the suspect, but he got away.

Hall is white. Police said she had been shot in the abdomen but her bulletproof vest protected her.

The GBI was asked by local authorities to conduct an independent investigation.   Hall told investigators she hadn’t turned on her police car’s video or audio devices and that no recording of the event had been made.   When investigators checked, however, they found that audio and video did exist, and what they saw and heard did not jibe with her earlier statements.

Based on what they found, investigators concluded Hall was not a victim of a shooting.

At a press conference on Friday, investigators and prosecutors stopped short of saying that Hall shot herself, but did say they do not believe there were any accomplices.

Hall’s statement to police incited fear in the small central Georgia city, where it was believed that an armed and dangerous suspect was still on the loose.  Hall’s daughter spoke to CBS affiliate WGCL shortly after the incident, pleading for the gunman to turn himself in.

“For two weeks, the good people of the city of Jackson poured out their hearts in expressions of concern and support for what we believed to be a police officer – one of our own – harmed in the line of duty, Pippin said.

Hall is currently on paid administrative leave.  She has reportedly checked herself into a private facility, but is expected to be arrested and booked on the charges when released.