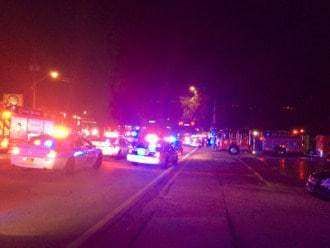 As a member of the Orlando Police Department Hazmat team, Gerry Realin was dispatched to deal with the aftermath and cleanup of the Pulse nightclub shooting in June — and he hasn’t recovered from what he saw there since.

Realin’s wife, Jessica, recalled how her husband reacted when he came home from work that day.

“He was very stark in the face and went into the bathroom and lost it,” she said. “He kept crying and crying and saying, ‘Why them? Why this? How did this happen? I don’t understand. I’m so sorry.'”

Gerry Realin tried to continue going to work as normal, but after passing out one day on the job, he took a leave of absence. He has since been diagnosed with post-traumatic stress disorder or PTSD.

“I know there are a lot of people that don’t believe PTSD is a real thing, that people should just be able to get over it, but it really is,” Jessica said. “It’s hard because when you see your loved one suffering from it, all you want to do is fix it, to make it better. But you can’t.”

The Realins hope they might use their story to change all of that.

As a Hazmat first responder, Gerry was more accustomed to securing meth labs and drug scenes on the job — not mass shootings. His attorney, Paolo Longo, said that many first responders bury their PTSD symptoms rather than take time away from work precisely because they can’t get workers’ compensation.