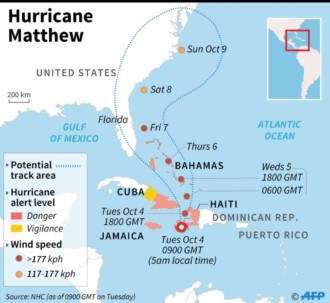 Hurricane Matthew narrowed its aim on Florida Tuesday as the fierce Category 4 storm continued its brutal march across the Caribbean, leaving a wake of misery across Haiti on its way to Cuba.

With the storm’s forecast track shifting west through the day, National Hurricane Center forecasters warned that much of the state’s Atlantic coast could begin to feel Matthew’s bruising winds in as little as two days. The storm is expected to track perilously close to a state that hasn’t taken a direct hit from a major storm in more than a decade — or even make landfall along the coast.

“You need to take this very seriously today and tomorrow,” National Hurricane Center Direct Rick Knabb said Tuesday morning. “The impacts are going to happen no matter what.”

Tuesday morning, authorities issued tropical storm watches for much of South Florida and hurricane watches from just south of Palm Beach County north to the Central Florida coast. As the storm approaches, the warnings will likely change, giving residents even less time to prepare.

Matthew will likely near the Central Bahamas tonight and move north-northwest by Wednesday, followed by a northwest turn Wednesday night. A steering ridge is expected to keep turning the storm toward Florida. After three days, however, forecasters say the ridge could shift and push the storm back to the east.

As Matthew nears Florida, it is likely to remain a dangerous Category 3 or 4 storm. The last major storm to strike South Florida was Wilma, which landed just south of Marco Island in 2005.

“It will take it a day or so to re-energize, but I think it’s likely to be a four again by Thursday morning when it’s getting near Florida,” Weather Underground meteorologist Jeff Masters said.

No evacuation plans have yet been announced for Miami-Dade County, Mayor Carlos Gimenez said in a press briefing. But he urged residents to prepare for the storm now, stocking up on water, batteries and supplies and securing homes and businesses. School Superintendent Alberto Carvalho said Wednesday after-school activities would be canceled. A decision on whether to hold classes Thursday will be made later today.

“If we do order evacuations, we will open shelters up in Miami-Dade County that can take care of you,” Gimenez said. To see a list of shelters, go to miamidade.gov/hurricane.

Gov. Rick Scott, who declared a state of emergency Monday, flew across the state, beginning in Marathon, and warned residents living along the I-95 corridor to ready for “direct impacts” from the storm that may include tornadoes, heavy rain, high winds and beach erosion.

Matthew is expected to near South Florida in the next two days. A three-day track early Tuesday put the storm over Great Abaco Thursday morning, just 185 miles from Fort Lauderdale — and within the sprawling storm’s wind field. Such a close brush could bring punishing floods, storm surge and beach erosion up and down the coast. Miami Beach, which routinely floods during high tide, is due to get hit with a seasonal king tides later this month. On Thursday, high tide is forecast for 2.7 feet.

“It’s not just a wind event. Heavy rainfall and inland flooding will be more of a hazard the closer this gets,” Knabb said.