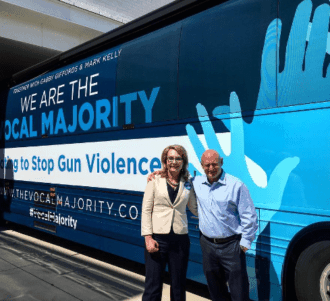 ORLANDO, FL –Former Congresswoman Gabrielle Giffords and retired NASA Astronaut and Navy Combat Veteran Captain Mark Kelly, the Co-Founders of the gun violence prevention organization Americans for Responsible Solutions PAC, gathered with Human Rights Campaign President Chad Griffin and local and national leaders to launch the 2016 Vocal Majority Tour, a 14-state, six-week, 43-city national bus tour that stretches until Election Day to ignite the Vocal Majority of Americans who support commonsense gun violence prevention laws and urge them to vote to reduce gun violence in November. The tour kicks off in Orlando, where on June 12 the nation’s deadliest mass shooting at Pulse nightclub resulted in the loss of 49 LGBT people and allies.

The Vocal Majority Tour is part of ARS PAC’s “Vocal Majority” campaign this fall to mobilize millions of Americans to make the 2016 election a referendum on gun violence prevention and to support leaders up and down the ballot who are committed to taking responsible steps that reduce gun violence. Following the rally in Orlando, the Vocal Majority Bus Tour will travel to 43 cities across 14 states, including Florida, Iowa, Minnesota, Wisconsin, Ohio, Maine, New Hampshire, New York, Maryland, DC, Virginia, and North Carolina.

At the  Orlando kickoff, Congresswoman Giffords and Captain Kelly were joined by survivors and families from the gun tragedy at Pulse nightclub; Chad Griffin, President of the Human Rights Campaign; candidates for Congress Val Demings and Stephanie Murphy, and other leaders.

Following the kickoff, Congresswoman Giffords and Captain Kelly joined a roundtable with local and national leaders to discuss the impact of gun violence on the Orlando community and the need for commonsense change.

“Stopping gun violence takes courage – the courage to do what’s right, and the courage of new ideas. I’ve seen great courage when my life was on the line,” said Congresswoman Giffords in her speech at this morning’s announcement. “Now is the time to come together – to be responsible! Democrats, Republicans – everyone.”

“Our country is in the grips of a gun violence crisis. And for too long, a small but vocal minority – driven and controlled by the gun lobby – have had outsized influence over our nation’s gun laws,” said Captain Mark Kelly in his remarks at this morning’s kickoff. “It’s time for the majority to be heard. Let’s work together to make sure that 2016 is remembered as the year we made our voices heard – and the year that the movement for safer communities won big at the ballot box.”

“The 49 LGBTQ people and allies who lost their lives in Orlando nearly four months ago were brothers and sisters, sons and daughters, friends and neighbors, husbands and wives. But above all, they were human beings – human beings who were loved, who had hopes and dreams for long and full lives. And they were murdered simply because of who they are, and because it is too easy in America today for a dangerous person to buy a dangerous weapon,” said HRC President Chad Griffin. “This November, we need to elect candidates up and down the ballot who not only stand up for the equal dignity of the LGBTQ community, but stand up for our right to live and love free from fear and violence.”

“As a proud veteran and someone who lost a family member to gun violence, I want our leaders to do more to save lives and protect our communities,” said Celia Ruiz, the sister of Juan Guerrero who was killed at the Pulse nightclub. “Our rights come with great responsibility, and it is time for the vocal majority of Americans who want change to speak out.”

“As a survivor of the tragedy at Pulse, I am proud to be part of the Vocal Majority of Americans calling for responsible change,” said Angel Colon. “I’m honored to stand with Congresswoman Giffords and Captain Kelly in this badly-needed fight for safer communities.”

ABOUT GUN VIOLENCE IN THE UNITED STATES