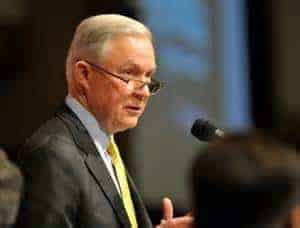 “This committee has a duty to our citizens to carefully examine the qualifications of nominees for the Federal bench and to give our approval only to those who have demonstrated a personal commitment to the principle of equality for all Americans and a sensitivity to the long history of inequality which we are still struggling to overcome…Mr. Sessions is a throwback to a shameful era which I know both black and white Americans thought was in our past. It is inconceivable to me that a person of this attitude is qualified to be a U.S. attorney, let along a U.S. Federal judge. He is, I believe, a disgrace to the Justice Department and he should withdraw his nomination and resign his position.” — Sen. Edward M. Kennedy, Senate Judiciary Committee Opening Statement, March 13, 1986

During a presidential campaign rally in Dimondale, Michigan, Republican nominee Donald Trump made an impassioned, six-word overture to African Americans, who had shown little enthusiasm for his campaign: “What do you have to lose?” Well, if the President-elect’s cabinet nominations are any indication, for African Americans—and anyone concerned over imminent threats to justice for all Americans—the answer is simple: everything. With Trump’s nomination of Republican Alabama Senator Jeff Sessions as attorney general, the stage appears set to rollback the clock on racial justice, immigration policy, LGBTQ movement advances and gender equality, among other hard fought for gains in the American struggle towards equality for all its citizens.

Sen. Sessions first emerged on the national stage in 1986, when President Ronald Reagan nominated the then United States attorney for the Southern District of Alabama for a federal judgeship. His bid for the lifetime appointment was promptly derailed by the Republican-controlled Senate Judiciary Committee as a result of sworn testimony that pointed to a disturbing pattern of racist actions and comments. Among the diverse allegations brought by witnesses, Sen. Sessions was accused of calling an African-American prosecutor “boy” on more than one occasion. He was also accused of calling a white attorney a “disgrace to his race” for representing Black clients in a voting rights case. Sessions labeled the NAACP and the American Civil Liberties Union “un-American” and “communist-inspired” organizations, arguing that the groups “forced civil rights down the throats of people.” He also publicly described the Voting Rights Act of 1965 as “an intrusive piece of legislation.”

For his alarming and distressing comments, Sen. Sessions became the second man in half a century to be rejected by the Judiciary Committee. By a bipartisan vote of 10-8—with two Republicans joining the Democrats—Sen. Sessions’ nomination was rightfully opposed. But he wasn’t finished. Sen. Sessions went on to become the attorney general of Alabama, then he moved on to become state’s junior Senator. And now, a man once rejected as too racist to hold a federal judgeship, and has demonstrated a career-long, deep hostility to civil rights, is now being considered to serve as the nation’s chief enforcer of civil rights law. A man who once described the Voting Rights act as “intrusive,” he is now being considered as the nation’s top law enforcer, tasked with enforcing our nation’s voting rights laws.

It seems the Trump administration is poised to set the fox to guard the henhouse.

As it did three decades ago when Sen. Sessions testified before it, we expect and demand that the Senate Judiciary Committee conduct a thorough and complete examination to determine if Sen. Sessions is fit to serve in this crucial federal justice enforcement capacity. But this examination cannot, and must not, be limited to past transgressions. Sen. Sessions, who has worked as a public servant for decades, has amassed a record that can speak for itself—and it speaks volumes.

In 2006, Sen. Sessions supported a ban on same-sex marriage. In 2009, Sen. Sessions voted against a bill that would expandfederal hate crime legislation, and against Lilly Ledbetter Fair Pay. Sen. Sessions has opposed legislation that would restore the pre-clearance provision of the Voting Rights Act—supported by civil rights groups. And, during a debate on immigration reform, Sen. Sessions insulted Dominican immigrants, claiming that, “Fundamentally, almost no one coming from the Dominican Republic to the United States is coming here because they have a provable skill that would benefit us and that would indicate their likely success in our society.” As it did three decades ago, the Judiciary Committee must vigorously question Sen. Sessions and seriously contemplate whether his 30-year record of action and statements befits a candidate whose job requires enforcing the constitutional and civil rights of all Americans.

Trump Turns His Back On Struggling Americans, Small Businesses, State And Local Governments

Trump Turns His Back On Struggling Americans, Small Businesses, State And...

Foreign Influence and the Integrity of Our Democracy