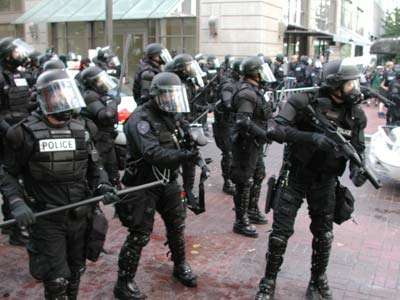 President Trump has campaigned for dramatic change in the enforcement of the rule of law in America. He and his team have decided that his executive orders will dictate the laws in the land. In one month, he has signed 24 executive orders, and they are attempts to make major changes in U.S. law. The content of these executive orders indicate a lack of respect for civil rights and the Constitution of the United States.

During the week of February 3rd, ICE (Immigrant and Customs Enforcement) officers arrested 600 undocumented immigrants. Many of these immigrants had minor violations dating back several years, and there is no distinction between felonies and misdemeanors.

Under Trump’s executive order, he authorized The Department of Homeland Security to hire an additional 10,000 agents. At this point, this is a very vague order, and immigrants as well as U.S. citizens have been stopped and questioned by ICE.

”The potential for a police state is clear. There is no limit to what immigration cops could do. Under the order, they would be able to deport anyone convicted of fraud in any official matter before a governmental agency. Or unauthorized immigrants who have abused any program related to receipt of public benefits” said Bill Boyarsky of the Truth-Dig.

As President Trump puts pressure on local police officers and sheriff deputies to work with immigration cops, things are starting to get crazy. ICE agents can use their own judgment to enforce this order, and they almost have unlimited power.

During the February 3rd week of ICE agents’ raids, the targeted group was the Latino community, but inside the Trump administration, there is also a war on Islam.

“It’s scary to me that people [within the administration] have this idea of, ’We are at war with Islam.’ That’s the kind of thinking that leads to World War III. I don’t think we can be alarmed enough,” says Ms. Cat Deakins, a cinematographer in Los Angeles.

Blacks in the inner-city have always lived in a police state, so there will not be a major change in their environment. But President Trump wants law enforcement to become tougher and more repressive. In the 1980s, Trump took out a newspaper ad in response to the Central Park Five case, headlined “Bring Back the Death Penalty, Bring Back Our Police.”

This is not a mistake that the new president has included so many generals and high level military personnel in his cabinet. In order for Trump to enact his agenda, he needs the military, ICE, and police to support and enforce his executive orders.

In the event of a violent protest or if police are killed, Trump can blame the courts, the media, the protesters, and any political opposition. The police state under Trump is not coming, it is here.
On February 7th, Muhammad Ali’s son returning from a Black History event in Jamaica was detained for two hours and asked questions by border agents if he was Muslim. Even though he had a US passport, he was still detained at an immigration checkpoint at Fort Lauderdale Airport.

This happened during the Muslin ban executive order, and Muhammad Ali’s son believes this is Trump’s effort to ban Muslims’ from America. Many civil rights lawyers allege Trump is looking for an excuse to suspend civil liberties under the patriot act, and citizens can be held in prisons without legal representation.

The police state under Trump is based on hate, and Sheriff Joe Arpaio of Maricopa County, Arizona had his deputies prowling the streets, stopping anyone who looked Latino, and asked to see their legal documents.
President Trump is at war with every race that is not White in America. Who will win?