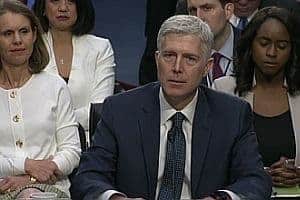 Much is at stake with this Supreme Court appointment, as Gorsuch could swing the Supreme Court to the right on issues ranging from voting rights and criminal justice jurisprudence to housing and employment discrimination.

National civil rights leaders are concerned about seeing Gorsuch on the Supreme Court.  Justices are appointed to the court for life, and their influence on significant issues lasts for many years beyond the term of the sitting president.  All of the leaders closely watched the hearing and carefully reviewed testimony. Kristen Clarke, president and executive director of the Lawyers’ Committee for Civil Rights Under Law, testified before the committee on Thursday afternoon. Briefing participants will also discuss the likelihood and need for democrats to impose the nuclear option to force the Senate to surpass a 60-vote threshold in order to confirm Gorsuch’s nomination.  While Democrats could try to filibuster, Republicans have enough votes to change the rules to defeat it.

WHAT:  Teleconference briefing on Gorsuch nomination

WHO:    Kristen Clarke, president and executive director of the Lawyers’ Committee for Civil Rights Under Law

Wade Henderson, president and CEO of The Leadership Conference on Civil and Human Rights

Cornell William Brooks, president and CEO of the NAACP