Off To Prison? New Handbook Helps Inmates Survive Life In The Slammer 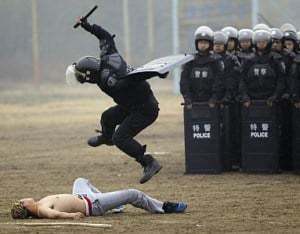 But what if a jury doesn’t buy your story and you’re headed to federal prison. Is there a guidebook for that, too?

The recently released Federal Prison Handbook: The Definitive Guide to Surviving the Federal Bureau of Prisons by Christopher Zoukis (www.prisonerresource.com) provides the newly incarcerated with remarkably practical tips, such as how to choose the correct (and safest) seat in the dining hall and how to greet your new cellmates properly your first day on the cellblock.

Although the handbook may seem like niche publishing at its finest, Zoukis says he sees a definite need created by a growing state and federal prison population that jumped more than 700 percent over the last four decades.

“If you don’t know someone ensnared by the American criminal justice system, someone you know surely does,” he says. “Believe it or not, someone connected to you or to a close friend probably needs this book.”

The information also could be useful to families and friends of inmates, attorneys, prison consultants, academics, sociologists and others, he says.

Zoukis, a prison-reform advocate and federal prison expert, knows the system from the inside. He’s serving time at the Federal Correctional Institution Petersburg Medium in Virginia, home to 1,555 inmates, and is scheduled for release in 2018.

Federal prisons themselves provide inmates with shorter, less detailed handbooks. Those share basic information, but fail to include useful survival pointers such as “never actually accuse someone of being an informant” and “even the most hardened, tattooed convict appreciates being treated civilly.”

Some of the other valuable instruction that newly incarcerated readers can discover within the Federal Prison Handbook’s 490 pages includes:

· The best ways to sidestep fights and the options that provide the greatest protection if a fight can’t be avoided. (Hint: Ignore the guards’ orders to stop and lie on the ground until it’s clear everyone else is secured. Better to endure a guard’s wrath than the physical pummeling from another inmate.)
· How to avoid scams, schemes, thefts and other problems while living in a population with more than a few untrustworthy individuals.
· How to find what you need in the prison’s underground economy, and how the preferred legal tender is postage stamps and, oddly enough, packages of mackerel.

Zoukis hasn’t been idle during his time behind the prison walls. He has written two other books, College for Convicts and Prison Education Guide, and also is a contributing writer to The Huffington Post, New York Daily News and Prison Legal News.

“I like to think of myself as both a student and a scholar of prison life,” he says. “I’m able to guide people through life in prison because it’s not just something I’ve heard about or read about. I’ve experienced it.”