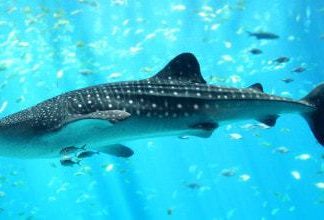 Back in 2015, 3.27 million people participated in scuba diving in the United States. While it’s normal to see fish and other wildlife under the sea, what one Florida diver saw is one for the record books.

Keith Brock was diving off of West Palm Beach with his family when he encountered a massive 35-foot whale shark just swimming around. The shark was hanging out in an area of the beach known as The Trench, which is known for interesting sea life. However, Brock explains to News4Jax, that in his entire tenure of diving, he has never seen anything like this massive animal swimming so peacefully.

Brock says that the shark was so quiet just swimming along that he never noticed anything until a white blob appeared in the corner of his eye. Describing the animal as looking like a cloud, Brock says the shark eventually came face to face with the scuba divers during their swim.

For perspective, 35 feet is about the size of the average yellow school bus.

Despite the animal’s massive size, Brock wasn’t the least bit afraid. He knew that whale sharks are quite docile, and since they feed on plankton instead of fish, he knew this encounter wouldn’t turn into anything reminiscent of the 1970s Jaws film.

“I saw some cobia, which are the larger fish seen in the video swimming around the shark. They’re typically found around larger predatory animals in the ocean,” Brock explains. “It came right at us. It had no concern that we were there in the water with it. It was amazing.”

Local shark experts explain that this sighting was incredibly rare as whale sharks usually migrate through the warmer waters of the Gulf Coast. However, since the summer is creeping up on us, they warn that other sharks may be spotted along the coast as they love warm temperatures.

As of this year, 15 different shark species have been documented in Northern Florida.

Cure for Arthritis on the horizon with gene editing