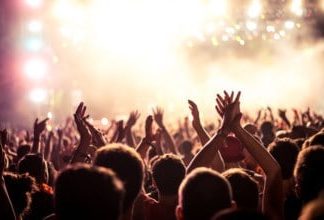 Dancing is a form of socializing, artistic expression, and exercise — the average 150-pound person burns about 240 calories per hour when dancing. But this month outside Ivanka Trump’s D.C home, activists used dance as a form of protest.

About 200 LGBTQ and climate change activists partied hard outside Ivanka Trump’s home on the night of April 1, drawing quite a spectacle to her Dupont Circle neighborhood. This peaceful protest was organized by WERK for Peace, a queer artist collective, 350 DC, Queer Resistance, and the Trans Women of Color Collective as a way to show solidarity against President Donald Trump. Specifically, the protesters were concerned by executive orders rolling back LGBTQ protections and climate change policies put in place by President Obama.

Not only did the protest dance party highlight these issues, it also gave one of Ivanka’s well-dressed neighbor’s 15 minutes of viral fame. Today, at least 68% of Americans own a smartphone (double the number from just 2011), and images from the protest were widely shared online. One picture in particular stood out — it showed Ivanka’s neighbor Dianne Bruce watching the dance party with a fur coat and glass of wine.

According to TIME, as soon as “Bruce heard the crowd marching down her street, she grabbed her fur coat off the bannister and set out with her husband to enjoy the festivities.”

“It was the entertainment for Saturday night,” she told the magazine. “A neighbor had a couple of glasses of wine, and we were standing so they gave us one as neighbors do, and at the end I gave her back her glass.”

For the activists who organized the rally, the night was about more than dancing. WERK for Peace was upset after President Trump signed an order that made it harder for the federal government to track labor violations and discriminatory practices against LGBTQ individuals. The group believes that even though Ivanka has labeled herself as an LGBTQ ally, she is not doing anything to protect the community within her father’s administration.

WERK for Peace organizer Firas Nasr explained to the Huffington Post that the entire goal of this protest was to get Ivanka to open her eyes and not to remain passive.

“While Ivanka Trump has painted herself as a ‘friend of the gays’ and ‘climate czar,’ she was radio silent in the face of blatant attacks on our climate and on the LGBTQ community last week… We celebrated our earth and our bodies, and we hope that Ivanka will do the same by speaking out and acting in solidarity with the LGBTQ+ and Climate Justice communities.”

WERK for Peace handed out flyers all over the neighborhood exclaiming, “Shake what your Mamma Earth gave ya and WERK it for climate justice!” Neighbors described the peaceful protest as light-hearted and fun, and that even though the organizations were clearly frustrated with what is going on politically, everyone had a big smile on their faces.

Ivanka Trump’s neighborhood is made up mostly of liberal Democrats, with the Obama family living just a few blocks away.

This isn’t the first peaceful protest for WERK for Peace. Since the presidential election, they have thrown dance parties in front of Vice President Mike Pence’s home and the Trump Hotel in downtown D.C.

Ghostwriting: A Lucrative Market for Writers