Almost 2,000 people crowded into the Eglise Baptiste Philadelphie d’Orlando church last weekend to demand that President Donald Trump expand immigration protections for Haitians who fear they may be deported.

The deadline for the Trump a 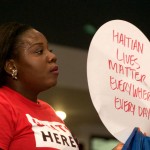 dministration to decide whether it wants to extend temporary protected status for Haitians is May 23.  The Obama administration granted Haitians this status after the devastating 2010 earthquake in the Caribbean country, which killed hundreds of thousands of people and left more than a million people homeless. Haiti had not yet recovered when it was hit again last year by Hurricane Matthew.

Last month, James McCament, acting director of U.S. Citizenship and Immigration Services, said “conditions in Haiti no longer support its designation” for temporary protected status for refugees. If the Department of Homeland Security does not extend protections for 58,000 Haitians, they could be sent back to their country when the program expires on July 22. The Tampa Bay Times reports even Florida Gov. Rick Scott has asked DHS Secretary, John Kelly, to extend protections for the thousands of Haitians who live in the state.