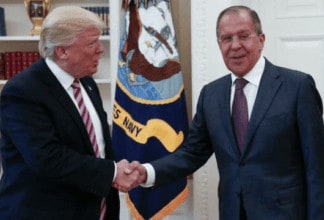 The latest bombshell to hit the Trump White House is that President Trump revealed highly classified intelligence information to the Russian foreign minister and ambassador while meeting with them last week.  The Washington Post reported that official accounts say Trump relayed information from a critical source of intelligence on the Islamic State in Iraq and Syria.

After the meeting, the Post reports, White House personnel contacted the CIA and National Security Agency and urged them to contain the damage, according to the Post.

In possibly the shortest press conference ever, National Security Advisor H.R. McMaster spoke to the media just a few moments ago and denied The Post report, calling it “false.” He said nothing was disclosed about military operations that were not already publicly known.  He took no questions.

He also made no effort to provide specifics on which ‘already publicly known operations’ were discussed, so the statement by itself is incapable of being fact-checked– sort of like the statement that the Trump presidency is slowly spiraling the White House out of control.