She deflects speeding bullets with her bracelets, swan dives off a tall cliff to rescue an Army officer who’s crash landed in the ocean, and dazzles with spectacular sword-and-shield combat moves.  Her golden lasso compels you to tell the truth.  She’s a friend/companion to the Army officer, a princess to her Amazonian sisters.  And she does it all with power, grace, wisdom, and€¦wonder.

If you were choosing teammates to defeat the bad guys, would you pick Wonder Woman?

Created in 1941 as a kinder, gentler comic book superhero, she most recently appeared onscreen in 2016’s Batman v Superman: Dawn of Justice, intervening in the nick of time to help the Man of Steel and the Caped Crusader.  They’ll all return this November in Justice League.  But first, Diana Prince/Princess Diana (Gal Gadot) gets her own film — filled with action, excitement, nobility (parts made me want to cheer), plot twists, compassion, and love — to remind the world of her roots, her mission — and femme power.

Superman (1938 comic launch) and Batman (1939) were becoming too violent for many readers’ tastes.  Seeking a family-friendly solution, publisher M.C. Gaines hired Marston, who recommended a “female superhero” with powers related to “love and truth and beauty” to inspire and sell comics to girls.

Strongly influenced by the women’s suffrage movement, Marston wanted “to create a feminine character with all the strength of Superman plus all the allure of a good and beautiful woman.”  He once admitted, “Frankly, Wonder Woman is psychological propaganda for the new type of woman who, I believe, should rule the world.” 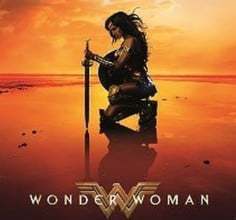 The United Nations named Wonder Woman its ambassador for female empowerment — until a slew of UN staffers and others complained she was too white, too American, and too curvaceous.

Greek and Roman mythology figured prominently in Marston’s youth, so it’s not surprising that Wonder Woman’s saga is steeped in such lore.  She hails from Themyscira, a fictional island with only female inhabitants who fled Greece to escape enslavement by males.  She worships and interacts with Greco-Roman gods.

Some find biblical parallels in the Wonder Woman canon.  Amazons first lived in an earthly paradise, then were cast out (Eden allusions?).  The comic book Wonder Woman died, rose again, ascended to heaven for a time, then returned to earth.  Jesus certainly elevated the status of women (a central Wonder Woman cause).  In contrast to social norms, he taught, befriended, and traveled with them.  Women were the first at his empty tomb, first to see him alive again, first to spread that news.

The biblical Deborah was a judge, prophetess and military strategist with wisdom somewhat similar to Diana’s.  She instructed Barak, a male military leader, to engage in a strategic battle.  Barak replied, “I will go, but only if you go with me.”  Deborah chided Barak:  “Very well €¦ I will go with you. But you will receive no honor in this venture, for the Lord’s victory over Sisera [the opposing commander] will be at the hands of a woman.”  Another woman, Jael, used guile and stealth to kill Sisera.

Of course, significant differences exist between Greco-Roman deities and the biblical God.  The former were multiple, could be capricious, and exhibited flawed behavior.  The latter is depicted as being “one,” unchanging and “holy.”

In any case, superhero stories remain widespread, perhaps because they tap human needs to negotiate a hostile world.  Fantasizing about vanquishing evil and darkness — or cheering imaginary characters that do — can provide temporary diversion from life’s fears.

Consider this: Many who embrace God as their “superhero” would say he is reality, and that he sees a deep longing for deliverance in human hearts.  Could fictional-hero stories’ popularity reflect genuine human desire for divine connection?

Something to chew on as you enjoy watching your superheroes this year.

Rated PG-13 (USA) “for sequences of violence and action, and some suggestive content.”

Rusty Wright is an author and lecturer who has spoken on six continents.  He holds Bachelor of Science (psychology) and Master of Theology degrees from Duke and Oxford universities, respectively.  www.RustyWright.com