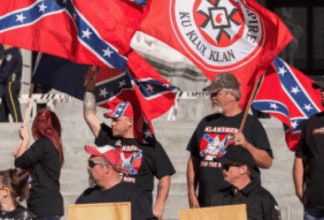 According to the Associated Press, the Ku Klux Klan has announced plans to rally in Charlottesville, Va.  The group has applied for a permit to hold its rally on July 8.  Because the right to assemble is protected under the constitution, the permit will likely be granted.

The Klan wants the controversial statute of Confederate General Robert E. Lee to be left where it is.  There has been talk and movement toward removing it from its present location.
- Advertisement -

Tensions are rising now that word of the rally has gotten out.  City officials are asking the general public to ignore the rally and stay away.  But adding fuel to the fire is the proposed rally on August 12 by a right-wing group known as Unity and Security for America.

Roland is right. “Where are y’all?”