Trump’s vindictive firing of FBI Deputy Director threatened to deprive him of his 20-year pension after decades of service.  It’s hard to see even Trump supporters defending #45 in this childish display of evil.

A post on Twitter by reporter Andrea Mitchell passed along a suggestion from one of McCabe’s supporters about how to possibly come to the fired Deputy Director’s aid. 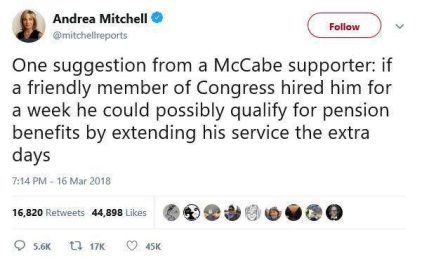 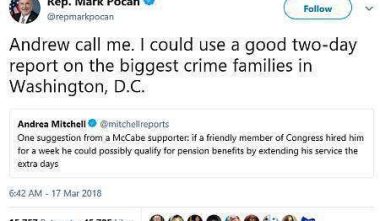 Donald Trump has lost the last piece of his mind he needed to function separate and apart from his old television series, The Apprentice.  His firing of Secretary of State Rex Tillerson echoes this point.  He seems to be still caught up in firing anyone who doesn’t agree with him– over the smallest of things.

Hats off to Rep. Pocan, just for doing the right thing.  Whatever your political or philosophical leaning, cheating a man out of his earned pension benefits really stinks.