PEARL HARBOR – A 2015 Evans High School graduate and Orlando, Florida, native is serving in the U.S. Navy as part of the world’s largest international maritime warfare exercise known as the Rim of the Pacific (RIMPAC).

A Navy logistics specialist is responsible for sending and receiving parts for the ship, and making requisitions for them.

Patterson is looking forward to applying the lessons learned from Orlando to working in the Navy.

“The most important lesson I learned growing up is to think before you speak,” said Patterson. “That allows me to assess any situation that comes before me in the Navy.”

As the world’s largest international maritime exercise, RIMPAC provides a unique training opportunity that helps participants foster and sustain cooperative relationships that are critical to ensuring safety at sea and security on the world’s oceans. RIMPAC 2018 is the 26th exercise in the series that began in 1971.

The theme of RIMPAC 2018 is “Capable, Adaptive, Partners,” according to Navy officials. The participating nations and forces will exercise a wide range of capabilities and demonstrate the inherent flexibility of maritime forces. These capabilities range from disaster relief and maritime security operations to sea control and complex warfighting. The relevant, realistic training program includes amphibious operations, gunnery, missile, anti-submarine and air defense exercises, as well as counter-piracy, mine clearance operations, explosive ordnance disposal and diving and salvage operations.

“I’m looking forward to the experience of RIMPAC and being able to learn about its mission,” said Patterson.

This year will also feature live firing of a Long Range Anti-Ship Missile (LRASM) from a U.S. Air Force aircraft, surface to ship missiles by the Japan Ground Self-Defense Force, and a Naval Strike Missile (NSM) from a launcher on the back of a Palletized Load System (PLS) by the U.S. Army. This marks the first time a land based unit will participate in the live fire event during RIMPAC. RIMPAC 2018 will also include international band engagements and highlight fleet innovation during an Innovation Fair.

“I’m most proud of earning my Navy and Marine Corps Achievement Medal this year from my previous command,” said Patterson. “It shows that I’m passionate about what I do, and it recognizes my hard work.”

“Sailors participating in this exercise, working with our Pacific allies, show the world the importance of working together providing the Navy the nation needs,” said Vice Adm. John D. Alexander, Commander, U.S. Third Fleet. “I’m honored to serve at sea with these men and women who make me proud every day. Americans can take great pride in their service knowing that they provide security at home while defending our national interests around the world.”

As a member of the U.S. Navy, Patterson and other sailors know they are part of a legacy that will last beyond their lifetimes providing the Navy the nation needs.

“I’ve learned that I’m very patient, and that I’m a go-getter,” said Patterson. “The Navy has shown me that, and I never thought I was before.”

“Serving in the Navy means a lot to me because I have the opportunity to break barriers,” said Patterson. “My goal is to be the first African-American female MCPON, and the Navy allows me to have that goal if I work hard for it.”

Additional information about RIMPAC is available at http://www.cpf.navy.mil 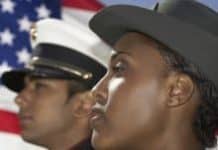 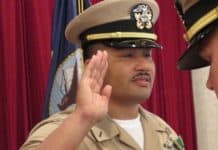