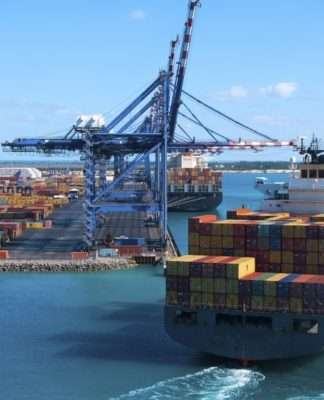 The executive director of the Port of Los Angeles, Gene Seroka, says the tariffs that have recently been enacted by the U.S. and the country’s trading partners would affect up to 15% of all cargo that imports and exports from Los Angeles.

Los Angeles is the nation’s largest container port. More than 3 billion tons of hazardous materials are shipped every year.

Chinese trading partners accounted for up to $145 billion in import and export trade at the Los Angeles port in 2017 alone. That’s more than half the port’s total of $284 billion and 59% of that trade may be subject to new tariffs.

“It’s not that we’re pushing the panic button,” said Seroka, “but we’re watching this very closely because it does have an impact on a number of things, from consumer prices to jobs.”

The tariffs also have an impact on other countries such as Canada. Peter Hanna, a regional sales manager for Orlando-based motorboat manufacturer Regal, says his dealers in Quebec rely on American companies for 95% of their boats.

Canada’s small boat-building industry wouldn’t be able to replace that supply. “They can’t supply all of our dealers,” said Hanna. “It’s impossible.”

Paul Bingham, an economist with Economic Development Research Group, says global supply chains include the trade of components and materials. Businesses who need to import or export certain components to produce may experience a higher cost of production.

For instance, although drug discovery is a multi-billion dollar industry, the U.S. is one of the world’s top producers in steel. In fact, in 2017 alone, the U.S. produced 82 million metric tons of steel.

If tariffs were placed on U.S. steel, it would affect global construction and architectural industries. It would also affect the price of many products.

One example is that, in 2017, there were 118,657 snowmobiles sold globally. But if the price of steel were to increase due to tariffs, the price of snowmobile production would also increase.

Those higher costs, Bingham says, would be passed onto consumers and reduce the demand for products. The result is that volumes would be driven down and cut into businesses at the ports including the $1.5 trillion U.S. logistics sector.

“From air transport to marine, trucking and rail,” Bingham said, “they’ll all be losers.”

Chief executive of the South Carolina State Ports Authority, Jim Newsome, says it’s too early to know for sure how the tariffs may affect U.S. port operations.

The Port of Charleston has close ties to the U.S. automobile industry and handles the importation of auto parts and materials. Newsome says it isn’t likely that auto manufacturers would choose to relocate their import operations.

The current retaliatory tariffs, Newsome says, are more of a negotiating tactic by other countries. He isn’t worried the tariffs would be set for the long-term.

Rising tariffs places greater uncertainty in the maritime industry, which handles up to 90% of the world’s trade. With the current tariff environment up in the air, it’s difficult for businesses to make clear decisions.

One Step Closer to Nuclear Holocaust?