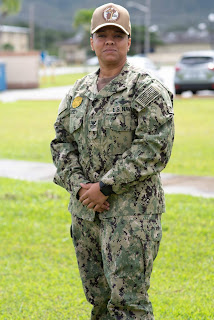 Master-at-Arms 1st Class Pamela Posey serves with the detachment operating out of the island of Guam.

“We provide security for ships at sea,” said Posey. “It is similar to a private security job except we are on ships on coastal waters and our jobs are to protect certain assets and materials.”

Posey credits success in the Navy to many of the lessons learned in Orlando.

“My first experience with the military was with Marine Corps Junior Reserve Officer Training Corps,” Posey explained. “It offered discipline and taught me how to be a leader early on. It made my life and my Navy transition smoother and easier.”

“Our sailors are proud to conduct maritime security operations throughout a critical theater like the Pacific,” said Lt. Cmdr. Edward Yandoc, officer in charge of CRG 1. “We are here to provide additional capabilities including, embarked security, search and rescue, maritime patrols and theater security cooperation and I think they are doing an outstanding job.”

“The culture and the people are the friendliest I’ve ever met,” Posey said.

“It is a great opportunity to showcase what our sailors are doing out here in Guam,” said Capt. Robert Baughman, Commander, Task Force (CTF) 75. “They work hard every day while serving far away from their families. I am grateful for the chance to recognize them and what they do to enable our mission forward in the Pacific.”

According to officials at the U.S. Navy’s Pacific Fleet headquarters in Pearl Harbor, Hawaii, the ships, submarines, aircraft and Navy personnel forward-deployed to Guam are part of the world’s largest fleet command and serve in a region critical to U.S. national security. The U.S. Pacific Fleet encompasses 100 million square miles, nearly half the Earth’s surface, from Antarctica to the Arctic Circle and from the West Coast of the United States into the Indian Ocean. All told, there are more than 200 ships and submarines, nearly 1,200 aircraft, and more than 130,000 uniformed and civilian personnel serving in the Pacific.

Though there are many ways for sailors to earn distinction in their command, community, and career, Posey is most proud of her responsibility for taking care of other sailors.

“I relish the opportunity to lead junior sailors and watch them grow,” Posey said. She also welcomes the mentorship and guidance she receives from her colleagues and those senior to her. “I will be even better prepared to lead sailors in the future. I am constantly learning. We depend on each other. We are family.”

As a member of one of the U.S. Navy’s most relied upon assets, Posey and other sailors know they are part of a legacy that will last beyond their lifetimes, one that will provide a critical component of the Navy the nation needs.

“My grandfather served in the military, he modeled discipline and served as a great example for me and my brother, who also serves in the U.S. Air Force,” Posey said.