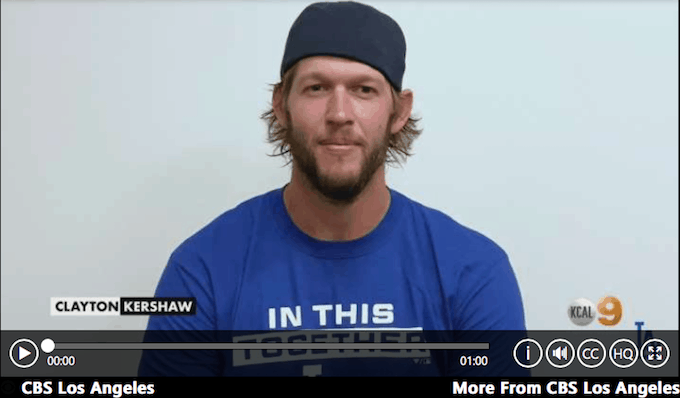 By Wave Staff and Wire Services

Ten Los Angeles Dodgers players have spoken out against racial injustice in a video released July 16 and committed to use their platforms to amplify the voices of Los Angeles social justice organizations.

“For centuries, the Black community has lived in a different America,” pitcher Clayton Kershaw said. “Instead of addressing racism, inequality, and injustice, many of us simply look away.

“Silence is no longer an option. I’m fighting for my teammates, their families, and their communities.”

The players said they also will match funds raised from the “In This Together” special edition T-shirts benefiting the California Funders for Boys & Men of Color Southern California: Our Kids, Our Future Fund.

The Dodgers wore the “In This Together” T-shirts during a workout at Dodger Stadium last week. The T-shirts are available for purchase at Dodgers.com/Together.

The group is a coalition of 13 organizations including the Children’s Defense Fund of California, Brothers, Sons, Selves Coalition and the Community Coalition.

Kershaw, Pederson, Stripling and Turner participated in a listening session last week with leaders of four of the organizations comprising the California Funders for Boys & Men of Color Southern California who shared the history of racial and social inequities in Los Angeles and how their respective organizations have been working for decades to seek change.

The players discussed how they want to use their platforms and resources to support the coalition’s efforts and be allies for the Black community.

A member of the Los Angeles Angels made his own social justice statement this week.

Angels relief pitcher Keynan Middleton evoked the names of Jackie Robinson and the Rev. Martin Luther King Jr. in explaining why he took a knee during the playing of the national anthem before the Angels’ home exhibition game July 20.

“Racism is something I’ve dealt with my entire life,” Middleton wrote on his Twitter and Instagram accounts. “As a Black man in this country it is my obligation to want to better the future for generations to come.

“Over the past few months I’ve been out in the community taking part in peaceful protests and having the difficult conversations that are needed for change.

“Before pioneers like Jackie Robinson, a Black man didn’t have a voice in the game of baseball. The foundation laid down and sacrifices made by Jackie and others is the reason I have the platform I do.

“I will not allow that to go to waste. Kneeling for me is one way I can use my platform for change in a peaceful way. I have the utmost respect for all the brave men and women that served this country.

“We must all take this fight against racial injustice seriously. Until things start to change in this country and my brothers and sisters don’t have to live in fear I will be using my platform to implement change.”