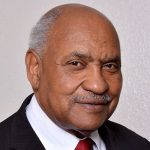 The recent deaths of C.T. Vivian, Rev. Joseph Lowery, Rep John Lewis and, earlier this year, Representative Elijah Cummings, all signal the passing of those who have guarded our freedom and led the fight for equality. These men were not giants. They were mere mortals like you and I who were brave enough to commit to what they believed in and to do so because the outcome involved more than themselves.

If we look back at their lives, we will find they did not set out to become great, but became great because they set out to make a difference. The differences they made came at great personal cost to each. For Representative John Robert Lewis, we have been able to visit that cost through the film footage of such things as Bloody Sunday where Civil Rights demonstrators were beaten, hosed by police and chased on horseback while marching for the right to vote. We gained that victory with the Voting Rights Act of 1965 and lost most of it with a bad U.S. Supreme Court Decision just a few years ago.

We who are today fighting for such things as an end to police brutality, the stopping of voter suppression and the reenactment of the Voting Rights Act, which would restore that which the U.S. Supreme Court decision took away, must ensure that their deaths and the legacies these men left do not die with them. Our committed involvement in the fight that they lead for us ensures that we convert their deaths into a “changing of the guard” and not the death of those guardians.

Locally, the lives and legacies of such men as Rev. George Walker Smith, Carroll Waymon, and now Dr. Robert Matthews must be continued with the same commitment and selflessness that made these men great. Those of us who are here must ensure that “the strong keep on coming.” We must be strong and committed because of the men and women on whose shoulders we stand. This is bigger than “Black Lives Matter” and the Covid Pandemic. Those who see the fight for human rights, life and dignity know that the battle is as serious as the pandemic. They also see police brutality as a danger as great as the pandemic itself.

We can each become participants in this battle. We can register to vote; join the demands for change at all levels of government and add our voices, our money and our bodies to the struggle. Where will you stand during this changing of the guard?

This is so important today.