The Daily Kos reports that a man shot a woman with a BB gun after she removed a “Trump 2020” sign that she thought had been placed in her brother’s yard as a prank. Peggy Fox had traveled to North Carolina this past Thursday to visit her brother.

Fox wasn’t aware that the sign was actually on the other side of the property line separating her brother’s house from a neighbor’s. Because her brother never expressed his political views she said she removed the Trump sign from the yard assuming it had been placed there as a prank.

The neighbor came out of his house and without warning shot her with a BB gun.

“(I felt) pain in my arm and I looked up and I heard this gentleman yelling at me,” said Fox, in an interview with WSOC. She told the local news outlet she was shot without any warning. “It was very frightening. Extremely frightening,” she said.

The neighbor, 76-year-old Worth McAllister, acknowledged he intentionally shot Ms. Fox but said he meant to shoot her in the backside not the arm. He said he was protecting his property. The BB gun, he said, was bought for keeping stray cats out of his yard.

“You defend your property and you end up getting charged,” McAllister said.

Fox told the news outlet that she would have put the sign back had McAllister told her it was his property.  What terrified her the most, she said, was McAllister believing his actions were justified.  When she threatened to call the police McAllister encouraged her to do so.

“He actually believed he could shoot me if I was on his property and, to me, that’s terrifying,” Fox said.

McAllister said he intended to file charges against Fox, but because she filed first, he will have t wait until the assault case against him has been heard. McAllister’s court date is set for November.

The BB gun pellet is still lodged in Fox’s arm. 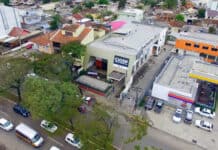 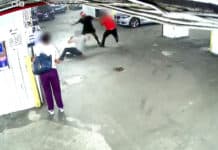