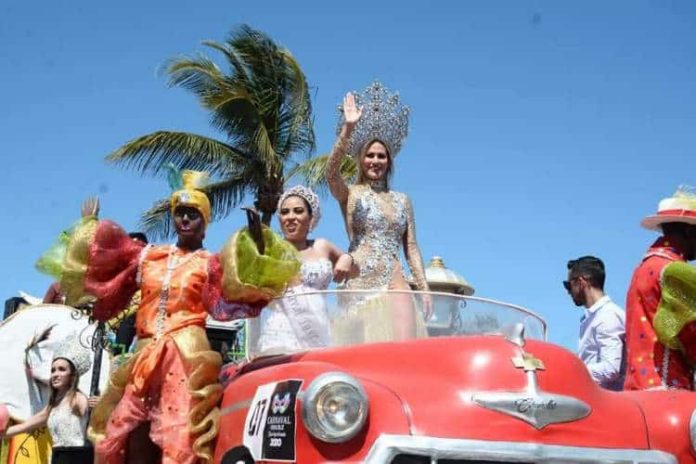 The famed Rio de Janeiro Carnival was a casualty of the Covid-19 pandemic in 2020, and it wasn’t alone. Other Latin American countries hold their own carnivals with food, music, dancing and the joy of embracing generations of tradition.

Whether they bounce back in 2021, the committees and governments that showcase their cultural heritages don’t plan to let old customs die.

The Rio de Janeiro Carnival is the largest in the world. Millions of people gather to admire a float parade in the Sambadrome, the celebration’s most important event.

Considered among the most joyous festivities in the world, Salvador de Bahia Carnival is titanic as well. There is no venue without music, costumes, and joy during the Carnival days.

“From 1886 and until today in Barranquilla, the Carnival becomes a point of encounter for the cultural expressions of the Colombian Caribbean,” said Lorena Ochoa Espinosa, a history teacher. “It is not very different from any other Latin American party. Deep down, everyone starts at a certain point in history with the same goal — party, music and fun.”

Every weekend from January through March 4, Argentina hosts its Carnival of Gualeguaychú, a province of the red land area close to Uruguay’s border. Also called Carnaval del País (the Country’s Carnival,) the festival holds a competition of costumes, floats and dance troupes that feature different topics.

In Montevideo, Uruguay, 2,000 drums beat together in one of Latin America’s longest carnivals, spanning from January through March.

Mexico hosts a very traditional Carnival in Veracruz, considered among the participants as the “happiest in the world.” Attendees to the Carnival of Veracruz dance to marimbas and enjoy the comparsas (dance troupes,) floats, costumes, masks and food.

“The Carnival of Veracruz was born in a room of the Lonja Mercantil (a meeting place for the elites),” said Ricardo Cañas Montalvo, a historian from Veracruz. “The old building still exists in the city’s historic center. After the Revolution, the merchants agreed to create a celebration that would gather locals and foreigners. The Carnival began as an economic project, which is how it works to this day, although yes, with many parties.”

The Carnival of Veracruz is a massive event where people can enjoy the world’s largest Arroz a la Tumbada (red rice with seafood.) Chefs and attendees taste it with great pride.

The Arica Carnival in Chile features indigenous dances of the Andean culture, with thousands of traditional dancers who parade, showing off their best moves. Natives from Chile, Bolivia and Peru share these dances. During the Carnival, people enjoy traditional dishes as well.

Bolivia and Peru also have their festivals. In Bolivia, the Carnival of Oruro lasts four days, enough to lift the spirits of its participants. Pagan and religious rituals intermingle. So do pre-Hispanic and religious traditions — especially with the Virgen del Socavón, the patron saint of Bolivian culture.

Carnivals in Peru blend Aymara, Quechua and mestizo elements. Each day of the week, Peruvians perform a different ritual.

Ecuador prepares in advance for the Guaranda Carnival, a party that includes foam and water wars, dancing, singing, food and costumes.

Paraguay’s and Dominican Republic’s meat festivals are carnivals that date back more than a century. The Carnival of Encarnación — the largest in Paraguay — celebrates to the rhythm of batucada, salsa and samba.

The Santo Domingo Carnival in the Dominican Republic features the Diablo Cojuelo, a character at the heart of the party. Dominicans also celebrate their Independence during Carnival.

(Translated and edited by Gabriela Olmos. Edited by Matthew B.  Hall)