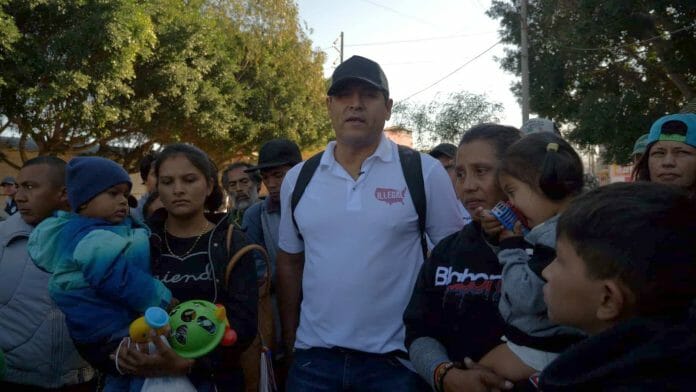 An estimated $180 billion in remittances was sent abroad in 2017 by migrants in the United States. Immigrants who want to work but not move here permanently are ideal candidates for guest-worker programs.

For those who do want to work and live here, President-elect Joseph R. Biden Jr. is expected to immediately propose an eight-year path to citizenship for 11 million immigrants devoid of legal status.

Qualifying immigrants would be given a temporary status for five years, earning a green card after passing background checks and payment of taxes. In another three years, they could apply for citizenship.

While the immigration debate remains a hot-button issue, few understand it better than Laz Ayala, who has lived on both sides of the paradigm.

He was a 14-year-old migrant fleeing from the Salvadorean Civil War in 1981, stuffed in the trunk of a Cadillac headed for the United States-Mexican border. After entering via Tijuana, Mexico, he settled in San Bernardino, Calif., where he enrolled in a local community college using a fake Social Security number.

“I wanted to do more than work for someone or do manual labor,” Ayala told Zenger News. “I wanted to work with my head. I felt like the doors had closed on me and slammed in my face.”

He faced barriers until 1987, when he became a legal citizen through marriage and was later naturalized. By that time, he had already started a career in real-estate sales — a job he still does proudly as a resident of Oregon.

“It was understood and known there were millions of people here and coming here, fleeing from wars and for economic reasons. It was an accepted fact. I don’t believe it became a question until the last decade, and certainly the last four years.”

Decades passed, and Ayala still experienced anxiety about his life and other migrants’ lives.

So helped start the , “shedding light on the facts and myths” about undocumented migration. The project has led to a book and feature film.

Its mission is to provide a voice for the voiceless — guest workers, attorneys, farmers, children, etc. — and show that not all migrants are “rapists, murderers, tax cheats.”

Living in a conservative community, he has risked his livelihood and friendships to pursue his goal.

“I had a period of intense frustration and sadness when the topic of undocumented immigration was politicized to the degree that it has been politicized, where people are demonized and criminalized and treated as being less than humans,” Ayala said, noting children were separated from parents and put in cages at the border.

The U.S. has the most migrants when compared to any other country, at almost 45 million people — quadrupling the same statistic since 1965 and accounting for nearly 14% of the general population, according to Pew Research Center. About 77% of the migrants are legal, while about 45% are naturalized. Unauthorized migrants tripled in size from 1990 to 2007.

Ayala said the most basic question hasn’t answered: Why is there an illegal immigration problem?

The conservative side of the debate “appeals to people’s fears” — such as being fearful of migrants occupying American jobs and businesses and benefiting from social programs. On the liberal side, politicians promise paths to citizenship and comprehensive reform, but neglect to define details — what he calls “nothing but empty promises and lip service.”

He said the system lures people in without offering rights or representation. Eventually, it marginalizes and demonizes them — and sometimes leads to incarceration.

“We have a system by design, not by coincidence,” he said. “Why would politicians want to fix a system, or do away with a system, that appeals to industries — agriculture, hospitality, construction? Why would they end the supply of illegal labor they depend on, either to make bigger profits or keep the cost of goods lower?”

“With President [Donald J.] Trump’s [presidential] campaign and presidency, we have seen the Republican Party move to a place of skepticism over immigration, while Democrats embrace immigration as a benefit to the United States,” Gelatt said.

She said the use of temporary workers is often one way to divert illegal migration flows into legal ones. If there were more temporary work visas available — such as Central Americans coming to the U.S. — the nation would experience fewer border crossings.

However, the debate is convoluted. Gelatt said the sponsorship of temporary migrants is embraced by business interests but opposed by unions and left-leaning politicians related to labor uses.

“The immigration debate has been largely influenced by party loyalties and special interest connections,” said Matthew Tragesser, spokesperson for the Federation for American Immigration Reform (FAIR). “These external forces have broken our immigration system to the point where both Americans and migrants are undermined.”

Tragesser said the time-frame in which the issue went from commonplace to contemptuous remains unclear.

“Take for instance the Secure Fence Act of 2006. This act helped fund 700 miles of border wall along the U.S.-Mexico border. It received support from Barack Obama, Hillary Clinton and Chuck Schumer, but in recent years, all three have opposed any type of border security and funding,” he said.

The Migration Policy Institute estimates that undocumented migration peaked right before the Great Recession, from about 12.3 million in 2007 to about 11 million now.

Tragesser argued that while guest-worker programs are intended to allow employers to access foreign labor in circumstances when American workers are unavailable, it has “long ceased to be the case, as U.S. employers abuse these programs to import cheap foreign labor.”

“This practice has limited job opportunities and wages of citizens and permanent residents, especially during (the) COVID-19 pandemic where jobs remain scarce,” he said.

He added that an alternative could be the federal internet-based E-Verify system, which essentially compares employer information to myriad government records to prove eligibility. The Department of Homeland Security states the system has over 967,000 enrollees, includes more than 2.4 million hiring sites and is joined by approximately 1,500 new participating companies weekly.

“The cheap business lobby has a significant influence on lawmakers and opposes any effort that limits their labor pool,” he said. “One of the keys to ending illegal immigration is to cut off the jobs’ magnet, and E-Verify does just that.”

Gelatt said guest-worker programs facilitate a working labor pool: “There are a lot of people from a lot of parts of the world who embrace the opportunity to come to the U.S. and earn higher wages.”

Possible drawbacks, however, include questions related to permanency and migrants overstaying temporary visas, which may be a bigger problem than illegal border crossings.

“There’s a concern that once you let people into the U.S., they’re not going to want to leave,” she said.

Simultaneously, Gelatt said there has been a decrease in the Mexican unauthorized immigrant population, due to declining fertility rates and fewer available jobs. The country’s economy, meanwhile, has strengthened and education has improved

A now-or-never mentality for reform

Ayala and Illegal the Project aim to mirror the Farm Workforce Modernization Act of 2019 for immigration reform, which proposes to revamp guest worker programs to allow for an increase in annual visas — including the removal of bureaucratic “red tape.”

“What it allows is just a drop in the bucket of what is needed to keep up with the demand in those industries that depend on foreign labor. … Until the demand for illegal employment is eradicated, the supply of undocumented workers will continue,” Ayala said.

He reached out to the offices of Oregon’s U.S. Sens. Ron Wyden (D) and Jeff Merkley (D), as well as elected officials from other states. He also sent a video to Donald Trump but never received a response.

Elected officials are showing interest on a new level, while spending tens of billions of dollars on detention and border walls is drawing more criticism than acclaim.

“We’ve been laying the groundwork for this moment, where we hope that the climate will be favorable to have real conversations to solve real issues,” he said. “I think we’re entering that period now.”