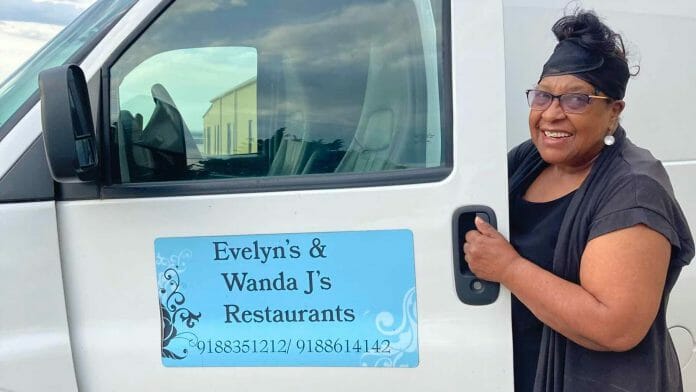 It was breakfast time, and Wanda Armstrong was rolling out the crust for her famous peach cobbler at Evelyn’s Soul Food Restaurant, a well-known dining spot in Tulsa, Oklahoma, that’s frequented by NFL veterans, politicians and even the last astronaut to walk on the moon.

By early afternoon, Armstrong has left Evelyn’s — which is named after her mother — and headed to Wanda J’s, her other restaurant in Tulsa. Located at the American Airlines maintenance facility in town, it bears the owner’s high-school nickname. In addition, Wanda’s son, Ty Walker, and five of his six daughters are cooking and serving guests at Wanda J’S Next Generation Restaurant on Greenwood Avenue.

According to restaurant reviews Evelyn’s Soul Food and Wanda J’s Next Generation are both five-star restaurants that specialize in Southern dishes like fried chicken, catfish and peach cobbler.

In the last few weeks, thousands of visitors have converged on Greenwood Avenue to commemorate the 100th anniversary of the 1921 Tulsa Race Massacre in the Greenwood District of the city, better known as ”Black Wall Street.” Among those visitors: President Joe Biden, who gave an address on the tragedy.

According to historical accounts, the massacre began on May 31, 1921, after it was alleged that an African-American man raped a white woman. This led to threats of lynching and clashes between armed groups as black residents tried to protect themselves from white mobs who burned buildings and houses, and more than 5,000 people were left homeless.

In the years after the massacre, Tulsa’s black business owners rebuilt and experienced a comeback. But then, in the 1960s four highways were built and the one running through Tulsa cut off the black business district, similar to what had happened in other cities across the country.

For Wanda Armstrong, pride and determination are part of the legacy of one of Tulsa’s most prosperous African-American families. Her family has built a dynasty along a business strip where one of the worst incidents of racial violence in U.S. history took place.

Borrowing a phrase from a customer, Armstrong said. “Don’t give me equal opportunity. Give me an opportunity to be equal. It doesn’t take a lot of money to start a restaurant. It just takes a desire and willingness to make it work.”

In terms of race, Wanda said she doesn’t use the words black and white in her restaurant. “I have customers who I refer to by flavors and I have vanilla, chocolate, strawberry, and Neapolitan. It is not a color thing; it’s a family thing.”

Armstrong opened her first restaurant 47 years ago, and she said while it has not always been easy, she has learned several things that contributed to her family’s successful formula.

“You have to have a product that people like, and then you have to target,” she said. “When I first started, I targeted most working men, and they would come in for breakfast, lunch and dinner. If they didn’t have food at home, they would say, I am going to Wanda J’s. Some women would bring their pots for me to put my food in and take it home.”

As she carefully prepared crust for her cobbler, Armstrong said in the kitchen of Evelyn’s that when it comes to preparing items on the menu, “We cook as we do at home. We still peel our yams … We make our cornbread from scratch.”

Armstrong named the restaurant after her mother, Evelyn Jefferson. She was the oldest of nine children brought to Tulsa in the 1940s after “Black Wall Street” was rebuilt. She said going into the restaurant business was easy because she loved to cook and many family events were centered around the table.

“I don’t spend a lot of money on advertisements,” said Wanda Armstrong. “It is the word-of-mouth that my customers have built, and I have been through generations of families.”

Sharla Mackey works with her mother at Evelyn’s, and she loves it.

Ty Walker, who operates Wanda J’s Next Generation, describes the family businesses as a reflection of the American dream.

“There has never been a country like the United States,” he said. “This is the land of opportunity. George Washington Carver, Booker T. Washington, Thurgood Marshall, all those cats before us, were able to succeed in the climate that they were under.”

On June 1, Biden addressed the nation from Tulsa because community activists, researchers, and journalists have pushed city officials to dig and probe sites believe to be mass graves.

“Some injustices are so heinous, so horrific, so grievous they can’t be buried no matter how hard people try,” Biden said inside the Greenwood Cultural Center. “Only with truth can come healing, and justice and repair, only with truth, facing it. … We can’t just choose to learn what we want to know and not what we should know. We should know the good, the bad, everything. That’s what great nations do. They come to terms with their dark sides. And we’re a great nation. The only way to build a common ground is to truly repair and to rebuild.”

Walter Armstrong sat in his business a half-block away while Biden spoke. He said that he hopes that the attention on the 100-year anniversary of the massacre will produce real change, because government can only do so much.

He said more young adults must embrace the work ethic that business owners had in 1921.

Beyond the destruction a century ago, Walter Armstrong also wants to call attention to another major setback the community subsequently faced. “Black Wall Street was rebuilt in the 1940s, but when the highways were built, they didn’t have an on- and off-ramp to Greenwood Avenue, and many businesses died.”

“We are just trying to empower the next generation of our kids of the legacy of owning your own business,” he said. “What people are not talking about was in the 1940s Black Wall Street was rebuilt, and it was thriving just as good if not better than in 1921. But without the off-ramp from the freeway, you cut off the head; the body will die; that’s what happened.”

(Edited by Matthew B. Hall and Kristen Butler)