ORLANDO ADVOCATEI AM AN ADVOCATE
Home About Us 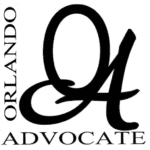 The Advocate’s mission is to expose discriminatory and unfair treatment in both private and public sector markets, and provide information designed to foster awareness, build community and empower blacks and other ethnic minorities, immigrants, young people, the elderly and other marginalized groups so that they can more effectively influence law- and policy-makers. We do this through the presentation of timely, relevant and informative news stories, points of view and editorials.

Our investigative journalism led over the years to federal investigations into the possible misuse of federal construction dollars in neighborhood redevelopment, and documented instances of patient abuse at the local VA Hospital before it was shut down and relocated. That series earned a surprising level of attention. The wife of one of the patients called to thank us for the series, and advised she had been contacted by the White House and told that the President had seen the story and extended his apologies, saying “this is not the way we treat our veterans.”  Indeed.

We uncovered and chronicled the heart-wrenching story of the Moores– an elderly couple whose land was stolen from them by an unscrupulous relative who forged their names on a deed of transfer and sold to Universal Studios for a million dollars.

In another series we proved with the assistance of a professor at the University of Central Florida that the official account of a woman’s alleged suicide in an International Drive hotel was not scientifically possible, and disclosed an attempt to keep criminal activity in the tourist area out of the news.  We stay with a story as long as it takes to uncover the naked truth.

We began our online presence in 1995, and we continue to strive to create a visually appealing and content-rich website that chronicles the experiences of being black in America, with all of its challenges and appeals.  We urge you to interact with our website.  Your comments are appreciated.   They let other readers know you stopped by.